Last Monday evening, Mayor McGinn and Councilmember Conlin held a ‘Seattle Transit Reception’ (slides) showcasing the city’s recently adopted Transit Master Plan (TMP), the Ballard rail study, ST3 planning, and recent progress on the Center City Connector project. The reception was open to the public but also clearly aligned to be of use for Rail~Volution attendees.

For visitors in town for Rail-Volution, McGinn’s words about the TMP were a good primer on Seattle’s geography and the various corridors the city is prioritizing for transit investment. In the five TMP corridors that the plan designates for high capacity transit (in most cases rail), the mayor reminded the audience that those select corridors are only part of a larger strategy to improve the performance of the city’s highest ridership bus routes.

The most interesting news of the evening was about the evolving design of the Center City Connector project. STB readers will already know that 1st Avenue was selected as the alignment to connect the South Lake Union and First Hill lines through downtown, but the remarks at the reception (and a subsequent Great Cities presentation Tuesday) clarified much about the current state of the project:

The last detail that Conlin and McGinn touched on, and no doubt the most crucial to the reliability of the project, was the configuration of 1st Avenue’s right-of-way. The city presented two designs illustrating center platforms with center-running rail, one with the streetcar operating in mixed-traffic and one with the streetcar operating in an exclusive lane. As one might guess, there is a significant travel time difference between the two options, the mixed-traffic configuration taking an average of 6 minutes longer to traverse the short 1st Avenue alignment than the option with exclusive lanes. While an additional 6 minutes may not seem like much, on a 1.3 mile alignment a 12 minute travel time is just 6.5 mph average speed (no better than current downtown trolleybuses), while a 6 min travel time would be 13 mph average speed (possibly faster than any other surface transit downtown). Note too that the 6 minute difference for a mixed-traffic line is an optimal scenario under baseline traffic conditions. Actual reliability could only be equal to or worse than this baseline.

Exclusive ROW will add 3,000 daily riders over the mixed-traffic scenario (31k vs. 28k), exclusive ROW will cost $2m less annually to operate ($16m vs. $18m), capital costs are cheaper for exclusive lanes (one less vehicle needed), and an overwhelming majority of public feedback preferred both 1st Avenue and exclusive lanes. Despite this, however, the Great Cities report stated: “Most believe mixed-traffic operations will be necessary given limited north-south rights of way.” 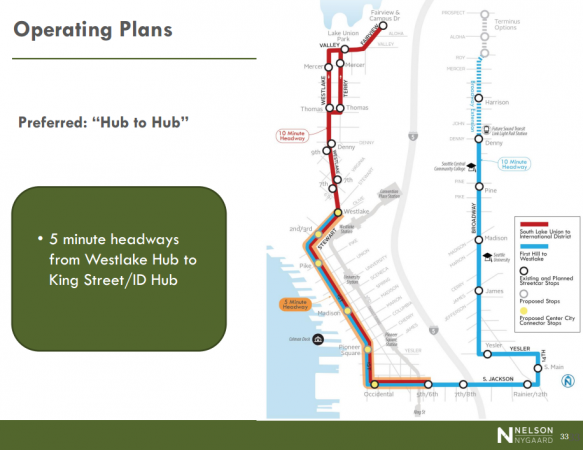 I encourage anyone interested in seeing this project succeed to attend SDOT’s upcoming open house for the project on October 29th, see the plans up close, and provide feedback on SDOT’s City Center Corridor design.

95 Replies to “McGinn and Conlin on Seattle’s Rail Future”