This weekend, I received leaked details of a massive, $12 billion highway package from an anonymous source in the legislature. Even worse than the last package we saw, it reduces bike/ped funding further, and adds new highway projects, including a massive JBLM interchange that likely includes widening I-5, and dozens of other highway expansions. This package includes funding for the west end of 520 – partly a positive, but it completely funds the project, making tolling I-90 unnecessary. Avoiding tolling on highways is a poor choice for both congestion and sprawl.

Tomorrow, the legislature will begin debating this new package (unofficially of course, as ‘debate’ doesn’t start until a session does, but it does start tomorrow), and they’ll almost definitely soon enter a fourth special session to consider it.

To protect my source, I can’t post the documents, but here’s a screenshot of much of the highway expansion component (click to expand). This package would cause significant increases in CO2, congestion, and sprawl, and offer a bare minimum of transit options. In the long run, driving sprawl like this also dramatically increases the cost to provide transit options. 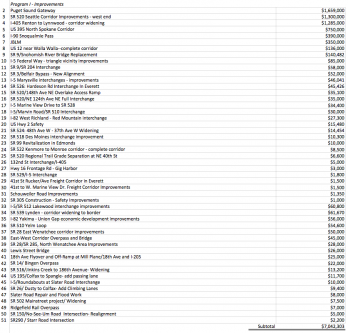 While VLF or sales tax at the county level, or a property tax at the city level, aren’t ideal ways to preserve Metro service, they’re better than megahighway projects across the state. If the legislature were funding Sound Transit 3 along with this, it might be a different story, but they are not. This is much, much worse than the Roads and Transit package local voters soundly trounced in 2007. It’s our job to urge our legislators to vote against it.

134 Replies to “Surprise! Fourth Special Session – And a Highway Package that Must be Stopped”