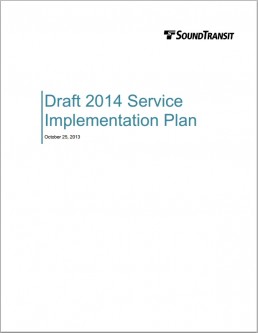 A couple of weeks ago, Sound Transit published a draft of its 2014 Service Improvement Plan (SIP).  The plan shows no major changes for 2014, as Sound Transit works both to digest the substantial changes it made to ST Express in 2013 and to prepare for the introduction of University Link in 2016.  Nevertheless, the draft SIP is worth a read both for its assessment of the state of the ST system and for some hints it provides about changes ST is thinking about making in the future.  While much of the information is not new (particularly the data about steadily increasing ridership during 2011 and 2012 throughout the ST system), ST does share some new information, and presents data in some new, and very accessible, ways.  Below the jump is a “grab bag” of interesting details from the report.

The draft SIP provides updated performance reports for all Sound Transit modes.  Matthew Johnson covered Link performance in a recent post, so I will focus on ST Express, where the draft SIP provides some interesting new data.  As with previous reports, it measures ST Express route performance on three criteria: boardings per trip, boardings per revenue hour, and “purchased transportation cost” per boarding (which includes amounts paid to partner agencies to operate the service, but not ST overhead).  These results are from 2012, so they do not include the effects of the 2013 changes.

I see the boardings per revenue hour measure as the most interesting of the three, as it is a very good measure of the efficiency of the service and does not take into account variances among partner agencies, which is a factor ST can address to some extent. Here are the 2012 results:

This chart shows exactly how difficult it is to achieve good efficiency with long routes, and why a distance-based fare structure is often a good thing.  Routes such as the 522 and 594 that have pretty good ridership but travel a long distance are penalized, while the very short 596 — a middling performer in terms of loads — provides ST with great bang for the buck.  Looking at all three performance measures, the standouts in the ST system are clearly the 550, 545, 511 (restructured in 2013), and 577.  Other routes, though, are mostly doing reasonably well, with only the 540, 542, and 560 unambiguously in the doghouse.  (ST indicates in the text that 540 performance continues to suffer, while 542 performance is improving; it restructured the 560 in 2013.)  For those who remember the early days of ST Express, with many marginal routes, this consistently good performance is nice to see.

As an aside, ST deserves enormous credit for not succumbing to the temptation to measure performance by mile, despite the length of many ST routes.  Measuring performance in cost per mile inherently favors routes that serve far-out sprawl, while penalizing routes that connect nearby centers even if they serve large numbers of riders.  The measures ST is using treat all riders and locations fairly, and correctly favor service that serves more riders, rather than fewer but farther-out riders, using a given amount of funding.

In 2013, Sound Transit restructured Seattle-Everett bus service to create Route 512, a 15-minute all-day route linking Seattle, Lynnwood, and Everett, in place of the two 30-minute all-day routes previously serving Seattle-Lynnwood and Seattle-Everett.  The restructure allowed for ten new peak trips in each direction on the corridor without any new service hours.  The draft SIP doesn’t include ridership data that allows us to compare 2012 and 2013 ridership directly, but implies that the restructure is likely to improve the performance ratings of all four of the routes, once 2013 data is fully available.

Sound Transit also changed service in the Bellevue-Renton-Auburn and Bellevue-Renton-West Seattle corridors during 2013, replacing some Route 566 trips with a new “super-express” Route 567, improving previously peak-only Route 560 service between Burien and Westwood Village to run all day, and eliminating all service to Alaska Junction.  The draft SIP is optimistic about the effect of the changes, saying that previously “unsatisfactory” Route 560 is “already showing improved ridership and productivity,” that Route 566 ridership has improved as well, and that new Route 567 is very popular.

A few ST Express routes are chronically overloaded at certain times of day.  The 550, 545, and 511 have consistently suffered overloads throughout peak hours, while select trips on the 510, 522, 554, 566, and 577 have also experienced regular overloads.  The draft SIP reveals that ST amended its operating agreement with Metro for the DSTT in order to add peak-of-peak outbound 550 trips at the September 2013 service change, and also indicates that ST is taking measures to reduce overloads on other routes, such as shifting more trips to peak hour on the 545, adding trips on the 511, and rescheduling trips for more consistent headways on the 522.  If any regular peak-hour 550, 545, or 511 riders or operators are reading, please comment on whether you think overloads have improved during 2013.

Planning for the Future

As usual with Sound Transit’s SIPs, this draft SIP is fairly general on concerning the changes Sound Transit expects to make in “out years” after 2014.  Still, the long-range plan does share some interesting tidbits.  Of course, UW Link and Angle Lake will open in 2016, extending the reach of Link.  South Sounder will add three new round trips, two peak and one off-peak, in 2016 and 2017.

The most interesting items in the long-range plan concern ST Express.  In 2016, ST is looking at “a potential restructure of SR 520 bus service that would make connections with light rail at UW Station and begin to develop ridership on the Northgate Link extension.”  There is no further detail about what this might entail, but the “Northgate Link” wording suggests a restructure of routes 555 and 556, which after a slow start have become quite successful in recent years.  Given the poor performance of route 540, it is also natural to assume that route 540 could be merged into other service connecting to University Link.  The implications for route 545, one of the strongest performers in the ST system, are unclear.

ST is also looking at increased Downtown Seattle surface bus operations when University Link opens, but does not specifically indicate whether it expects Route 550 to move to the surface.

Finally, there is a table beginning on page 107 which shows additions to service that may be needed to meet anticipated ridership needs in the long term, independently of potential restructures.  Particularly interesting items are improved night frequency on routes 512, 522, and 578; conversion to articulated buses on weekday route 542 and weekend route 545 service; and a limited amount of 20-minute service on Sunday for route 550.