A few weeks ago, I attended SDOT’s open house on the proposed Westlake Cycletrack. While most of the public feedback has focused on safety and possible parking loss, transit is also part of the picture, and one of my items of feedback for SDOT was that the project should maintain or improve the speed and reliability of transit service, as Westlake is a major thoroughfare for bus riders to Fremont, Ballard and South Lake Union. I think there is an opportunity to combine improved bike connectivity at the south end of the proposed cycletrack with improved southbound bus service.

Riders at the south end of the off-street portion of the Westlake cycletrack (which will end roughly at Aloha) will need a safe, comfortable, and direct way to connect to bike lanes on 9th Ave, Valley St, and (once Mercer West is complete) a cycletrack to Seattle Center on Mercer St. Currently, there are no bicycle facilities on the street that could provide such a connection. Meanwhile, southbound buses on Westlake in the PM peak are regularly stuck in a southbound traffic jam on the same part of Westlake, caused by all the cars that want to turn onto Mercer to access I-5.

My idea is shown on the map to the right. The section of 9th Ave from where it splits from Westlake, down to Mercer, is wider than the rest of Westlake or 9th. With the removal of one lane of parking, the conversion of another lane of parking to a peak-period bus lane, and a bus-only signal at 9th & Valley, it would be possible to put in a southbound queue jump for buses on the west side of 9th, and a two-way, separated cycletrack on the east side of 9th. 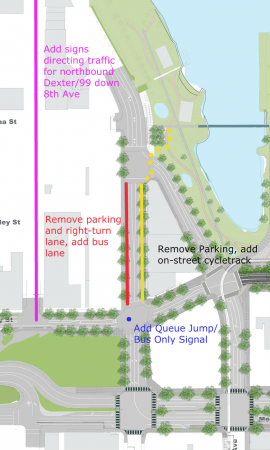 While the queue jump would not completely eliminate transit delays in the PM peak, as traffic can back up to Aloha, it would probably allow each bus to spend one less signal cycle getting though Mercer — a significant time saving. Similarly, the cycletrack would not completely solve all the bike connectivity issues in this area, as there would be an awkward transition to the 9th Ave bike lanes, which, to fix, would probably require a complete rethinking of 9th Ave.

The loss of the current right-turn pocket at 9th & Valley would be mitigated with signs further north on Westlake directing eastbound traffic on Roy St (likely headed to northbound Dexter or Aurora) to use 8th Ave, which is uncongested, and provides good access to Roy St.

This section of Westlake/9th has needed improved bus and bike facilities for years, but construction on the Mercer East project meant the street space in this area was needed for temporary reroutes. Now that Mercer East is over, that road space should be put towards longer-term more optimal uses — transit and biking. The Westlake Cycletrack project provides a great opportunity to do so.