People have been talking about rail transit to West Seattle for a very long time.  The second Forward Thrust proposal in 1970 incorporated a rudimentary West Seattle rail line with just two stops: the Alaska Junction and White Center.  Two decades later, the Seattle Monorail Project’s first proposed line, the Green Line, covered Alaska Junction and Morgan Junction with a possible extension to Fauntleroy.  After ignoring West Seattle in the Long Range Plan process that led to the 2007 and 2008 ST2 votes, Sound Transit recently began a corridor study of Downtown-West Seattle-Burien for high-capacity transit; the agency has focused heavily on West Seattle during the current process to update its Long Range Plan.  Seattle Subway’s vision map includes a West Seattle line covering North Delridge, the Alaska Junction, the Morgan Junction, Fauntleroy, Westwood, and White Center.  Rapidly growing transit ridership ($) in the wake of the Alaskan Way Viaduct replacement project has only added to the idea’s momentum.

But all of these past and present discussions have one thing in common: a lack of specificity.  A West Seattle rail line, it turns out, is easy to draw as abstract points on a blank map and surprisingly difficult to envision at the block-by-block level.  Geography, topography, Seattle’s sharpest class divisions, strange current service patterns, an overall lack of density, and ignorance about most of West Seattle combine to generate a lot of ill-informed, likely ineffective West Seattle transit proposals.  Even among transit planners and advocates, there is a lot of haze in discussions of how to serve West Seattle, and a surprising lack of awareness of what West Seattle residents actually need from transit.

The map above shows how I think a Downtown-West Seattle-Burien Link line should look.  Below the jump, I explain why.  In the process of doing so, I also show why a West Seattle line will be a difficult financial proposition, which may or may not be worth the investment.

Who Needs Transit in West Seattle?

To determine where a rail line should go, we need to figure out what areas are likely to generate the ridership to justify rail.  Two factors are informative here: 1) determining where major current or future destinations might be, and 2) looking at actual current transit usage.

The density map of Seattle gives us a good picture of where West Seattle’s greatest residential density is.  There is no high residential density anywhere on the peninsula.  From north to south, we see pockets of moderate density in the Admiral District, western Alki, Alaska Junction, Morgan Junction, High Point, and White Center.  If the map continued further south, we’d also see one more pocket toward the south end of Ambaum Boulevard.  Under current plans, there will soon be another pocket of moderate density in the “Triangle.”  Each of these is a logical place to at least consider an HCT stop.  To this list, we can add a few major non-residential destinations: South Seattle Community College, the school complex with Chief Sealth High and Denny Middle in central Delridge (which I will conveniently but not quite accurately call “Roxhill”), the Fauntleroy ferry terminal, and Westwood Village.  Let’s put these on a map and see what we get: 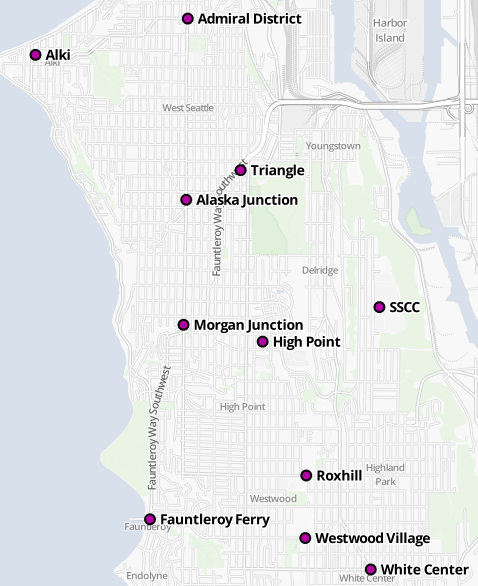 Uh-oh.  That doesn’t look much like a rail line.

Maybe considering the second factor, current transit usage, will help narrow down which of these areas could be in a sensible corridor for major investment.  For this purpose, we should be looking at the total number of daily riders a route serves, not at route productivity metrics.  Metro, which operates all of the significant transit in West Seattle today, published these numbers in Appendix K of its 2013 Service Guidelines Report.

The Delridge/Ambaum corridor runs away with the crown for West Seattle’s highest transit usage, with 8,600 daily riders on route 120, well distributed throughout the corridor.  Second place goes to RapidRide C (“route 673”), with 7,000 daily riders, the vast majority of which board at Morgan Junction, Alaska Junction, and Avalon Way.  In a distant third place come routes 21 and 21 Express, with 4,800 daily riders between them, mostly from High Point and Avalon.  Route 128 attracts 4,400 daily riders, but about half of those are from outside of West Seattle.

Bringing up the rear are routes that serve a few other points on our map.  Ridership from Alki, Admiral, and South Seattle Community College is not negligible, but can’t compete with that from other areas.  Ridership from the Fauntleroy ferry terminal is poor.  So if we exclude those destinations, here’s what we get: 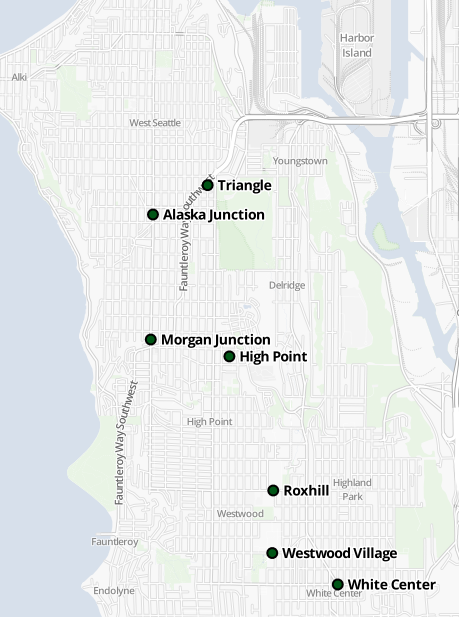 Now we’re talking.  We can see a rail line taking shape in this map.

If we assume that substantially all 120, 21, and RapidRide C riders shift to the rail line, along with a significant number of new riders as the areas served add density and as fast rail generates more ridership, we could be attracting 35,000 to 40,000 daily riders with these stops.  That’s more than Central Link currently serves, and enough to make a line at least intriguing.  So how do we actually build a rail line to serve all these points?

The central challenge confronting any project in West Seattle is topography.  West Seattle is built on a series of dramatic hills, with neighborhoods largely separated by cliffs and ravines.  All of this is separated by a sea-level river valley from the rest of Seattle.

The Triangle, Alaska Junction, Morgan Junction, and High Point are all at relatively high altitude — but are themselves separated by significant altitude changes.  South Delridge and White Center are only slightly lower.  Roads connecting many of these areas are steep and narrow.  Except along Ambaum south of White Center, surface running is not an option.  North of southern Delridge, elevated track or cut-and-cover tunnels are not an option either; the hills are just too steep.  That leaves us with only a deep-bore tunnel option for the majority of the line, from a portal west of Youngstown to at least a point south of High Point, a distance of over five miles.  (It’s possible that the mile or so under California Ave SW could be cut-and-cover, provided the trains can climb quickly enough from Youngstown.)

What’s worse, running elevated south of High Point isn’t easy either.  To serve Westwood Village, the line would need to run elevated through a medium-density, lower-income residential area west of Delridge, a move fraught with environmental challenges (Longfellow Creek runs through the area) and certain to generate furious and justified neighborhood opposition.

The simplest option is the one depicted in my first map: to continue the deep-bore tunnel all the way to White Center, with a portal in the commercial portion of White Center leading to an elevated section along Ambaum Boulevard.  The tunnel from Youngstown to White Center would be seven and a half miles long, longer than any single tunnel we have yet built in Seattle.  This option would also allow fast and frequent connecting bus service to every other point west of the Duwamish.

And then there is the other topographical challenge presented by the project: a new Duwamish River crossing.  Such a crossing would almost certainly be elevated, and would likely follow the current high-level West Seattle Bridge alignment very closely.  An elevated bridge of that scale represents a major, and costly, engineering challenge of its own.

Again, this assembly of a new Duwamish bridge, a seven-and-a-half mile deep-bore tunnel, and several more miles of elevated track might serve, by my very back-of-the-envelope estimate, 35,000 to 40,000 daily riders.

By comparison, the entirety of the combined U-Link and North Link tunnels is… about seven miles, and those two extensions are expected to serve nearly 100,000 daily riders combined, or more when Lynnwood Link is added.  The proposed Fremont/Ballard “Option D” requires only about four miles of deep-bore tunneling for 30,000 daily riders (and that estimate is based on a revised Sound Transit ridership model which some of us feel to be overly conservative).  The financial challenge of a West Seattle line is obvious, and not easy to reduce.

A “starter line” consisting of the Duwamish crossing and a short tunnel only to the Alaska Junction  would abandon most of the potential ridership, and present serious social-equity issues.  A Delridge-only elevated line would be much cheaper to build, but would similarly lose many potential riders — and would be cut off from the major sources of political power west of the Duwamish.  A bifurcation of the line into Alaska Junction and Delridge portions would likely lead to unacceptably low frequency along both portions, and would harm mobility between destinations within West Seattle.

If we are going to bring good HCT to West Seattle, I believe there is no option but to bite the bullet and build a full line similar to the one I propose above, with all the expense it implies.  Whether that is the best way for Seattle to spend capital dollars is a question we should all think through, and discuss, as the planning process for ST3 continues.

153 Replies to “How Might West Seattle Link Actually Look?”