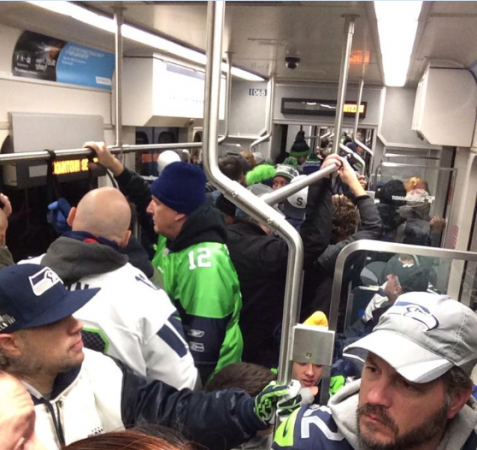 Record setting crowds today.  Expect delays and crowding on all buses serving downtown and crowding on Link. Remember tracking tools like OneBusAway do not work when buses are on reroutes. You can follow the mayhem at Metro, Sound Transit, Community Transit, and Pierce Transit. Latest from ST:

Weds, Feb. 5.  All Sound Transit Express bus service in downtown Seattle is experiencing significant delays.  Sounder is experiencing extremely high ridership and does not have the capacity to board passengers at all stations.  Riders are advised to take a later train when more seats may be available or consider other options such as Link or carpooling.  Link is also experiencing heavy crowding, however trains will be coming every seven and half minutes throughout the day. We apologize for the inconvenience and appreciate your understanding of the huge demand for transit services to today’s Seahawks Parade.

[UPDATE 13:47]  The South Sounder #1509 (4:12 pm departure) will turn around at Tacoma instead of continuing on to Lakewood.  It will deadhead back to Seattle to make an extra Lakewood trip departing King Street Station at 6:30 pm.

It has been a long day for everyone, please be courteous as we do our best to get everyone home quickly and safely. Go Hawks!

[UPDATE 15:06] Sound Transit is now saying that it is operating extra 4-car trains between Stadium Station and SeaTac Airport. Someone go out and get pictures!

The celebration in downtown Seattle continues. All buses are back to regular route, except for Pine St buses that are operating a modified reroute into downtown via 7th Av to Union St. Metro will continue to operate as much service as possible using all available resources until crowds and traffic clear. Wait for your regular bus or consider alternatives, then be prepared for lengthy waits and crowded buses. Sign up for Transit alerts for updates.

[UPDATE 16:03]  Sound Transit is saying on Twitter that they will be running backup buses for those who cannot get on the last Sounder train.

[UPDATE 16:53] Crushloads continue in the Downtown Seattle Transit Tunnel. If you are looking to use Link, it’s worth your time to walk to Stadium station to catch a 4-car train if you’re able.

#Seattle Police Department estimates #Seahawks parade crowd to be 700,000. The population of Seattle is 634,000. pic.twitter.com/PeP0UlBrZS