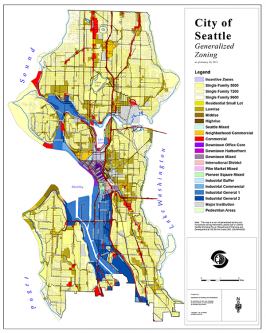 As we’ve said repeatedly on this blog, if Seattle is going to be the kind of city where a substantial middle class can thrive, it’s going to need more housing. A lot more.  A new report last week from the Seattle Planning Commission underscores the need for affordable “family-sized” housing in particular: just 3% of all affordable houses in Seattle have 3 bedrooms.  The lack of of such units is something I’ve long found puzzling.

The Planning Commission’s report suggests a number of ways to increase the number of affordable single-family houses, from tax incentives to new forms of housing.  Erica Barnett summarized the key points.   Most of the ideas involve creating various incentives or exemptions in the code to encourage the creation of 2-3 BR units in the city, or better coordination with Seattle Schools and other entities to foster affordable neighborhoods for families.  I’m particularly fond of the idea of “allowing a broader mix of housing in single-family neighborhoods with frequent, reliable transit.”

The real meat of the report, though, is an overall recommendation to up-zone Seattle’s single-family neighborhoods.  This is controversial, but important.  Discussions of where new development should go tend to be narrowly constrained to a few urban villages, while the vast majority of Seattle – something like 2/3 of the land – is considered off-limits (the yellow stuff in the map at right). So we argue about whether to allow 5 stories or 6 in a narrow sliver of Capitol Hill, meanwhile acres and acres of the city’s neighborhoods remain locked at absurdly low density levels.

To add insult to injury, as single family houses get more expensive, they become even more out of reach to larger families, resulting in a spiral whereby only small, wealthy families can afford them, thereby decreasing density even further. Gone are the days when the large houses on Capitol Hill housed families with 14 kids! Today, on the rare occasion when a plot of land in a single-family zone does become available for redevelopment, the land is so valuable that the only logical thing for a developer to do is build a huge, expensive house on it and sell it for upwards of a million dollars. Meanwhile, there’s a demonstrated demand for smaller housing – people want to live smaller, but their options are limited.

Up-zoning the single family zone at all will be politically difficult. Some have argued that the recent switch to district elections will make it even harder. The head of the SEIU, for example, called the ballot measure the “Craftsman homeowner-empowerment act.” But if we’re going to truly make Seattle affordable for families, there’s really no alternative.