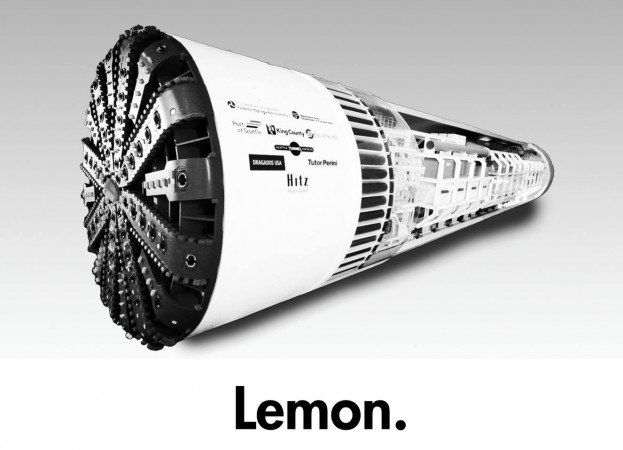 Bertha is broken. Seals around the machine’s main bearing are damaged, meaning muck is inside the bearing, causing heat and damage. At minimum, it will take several months to repair the seals, and possibly replace the bearing. Governor Inslee has even been asked whether it’s “time to pull the plug”. I propose a thought experiment – if we were to cut our losses and stop now, carefully avoiding the sunk cost fallacy, what could the money left over do to meet our mobility needs in the corridor?

First, let’s consider the high risk of failure. There’s been no indication so far as to the cause of the seal damage, or whether it might happen again. This matches WSDOT’s unwillingness to discuss risk or plan adequate contingency, as we’ve seen throughout the project.

An anonymous source on the project has told us that despite comments by WSDOT, the repair will not be possible from behind the machine, only from the surface. If true, and without a clear plan for preventing the problem again, this raises a serious question – what happens if this happens again under a building, and at greater depth?

Let’s say that to avoid this eventuality, we stopped now. The state has spent about $2 billion of their $2.8 billion limit, assuming no overruns (cough). The Port of Seattle funding, separately, is intended for viaduct teardown and surface street construction. So what would that $800 million, assuming we could spend it on anything, get us?

Before we continue, let’s see where we are – with just three projects, we could serve more than 60,000 new trips, for less than $150 million in local dollars (plus operating costs for the center city connector). And SDOT just released their 2012 traffic data – showing there are only about 60,000 viaduct trips, without a large spike in delay elsewhere.

That’s just how cost-ineffective this tunnel really is – most of this capacity can be met with an order of magnitude less money. Sure, the trips in cars aren’t as fast, but the trips on transit are much faster, and there’s another $650 million to work with! So what would we do?

For rail to Ballard, we could make up the entire cost difference between an Interbay elevated route and the Ballard subway option, or if Sound Transit already has Ballard taken care of, build the entire streetcar portion of Option 9. Or, we could do all the engineering for rail to both Ballard and West Seattle, AND every bus priority project in the Transit Master Plan.

Of course, we won’t really get this money “back”. It’s important, though, to consider the massive opportunity cost of spending this much money on such a high risk single project. The tunnel was justified over and over by proponents by asserting that surface/transit/I-5 couldn’t cover the required trips. Even at this late date, there is still enough money to address those problems, and dramatically improve the city’s environmental footprint and many other measures we care about.

Oh, and one more thing – this assumes no cost overruns. If we considered what we could do with all that money, it could be a lot more. I would link you to the WSDOT surface/I-5/transit plan to consider some of the other improvements that could be made (and to cite the grid connection number), but they’ve recently locked both documents from the public.