The jobs and retail along SE Eastgate Way neither receive nor deserve excellent transit service. Surrounded by vast surface parking lots and hiding from the main arterial, the buildings couldn’t be unfriendlier to pedestrian approaches. The south side of the road is given to the I-90 right of way rather than buildings, cutting the potential market in half. Vehicles getting on and off the freeway have the speeds one would expect. Bellevue does have long-term plans to make this less of a wasteland, but that’s irrelevant to Metro’s current service level.

However, there’s always value in optimizing the service that does exist, and there’s a nearly costless opportunity in the peak hours to provide something approaching frequent service. This is a lot of words to spill about a tiny and not very efficient route, and in many ways this kind of one-off peak service is the bane of a legible and flexible network. Still, it’s presumably symbolic of a larger pool of low-hanging fruit Metro could exploit with a little attention.

There are only two routes that serve the street. The 271 runs all day between Issaquah and Eastgate before heading on to Downtown Bellevue and the University District. Although this well-known route runs every 10-15 minutes, only selected buses continue beyond Eastgate to give it 30-minute headways on this stretch throughout the day.

Aside from a one-trip high school route, the only other service is the 217, a reverse-peak milk run that connects Seattle residents with Southeast Bellevue and Issaquah office-park jobs three times a day. 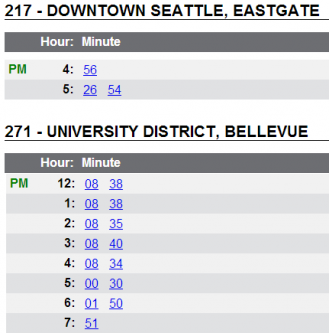 At right is a typical westbound afternoon schedule at SE Eastgate Way and 158th Ave SE, according to OneBusAway, near some sometimes-vacant office parks, a strip mall, lesser-known Microsoft and Boeing campuses, and other stuff.

Depicted this way, the problem is obvious: two 30-minute headway lines arrive four minutes apart, where better spacing would create 15-minute headways to connect this neighborhood in a straight line with the Eastgate transit hub and its suite of Metro and ST Express services. In many of these cases, constraints elsewhere prevent proper synchronization: the buses are hopelessly unreliable, or have transfer and interlining requirements elsewhere. However, that isn’t the case here.

The 217 is constrained in that it interlines with the reverse-peak 212 west of here, providing 15-minute headways from Factoria into Seattle, and (however imperfectly) at Eastgate P&R the 212 and 217 both try to avoid the half-hourly peak visits from the 554. In contrast, the 271 suffers no such constraints. The selection of 271 trips that continue to Issaquah is essentially arbitrary*, and nothing prevents Metro from sliding this selection to the trips that depart 10 minutes later. If Metro is going to provide this kind of service, it might as well make it as useful as possible.

* As far as I can see; Metro did not reply to my request for comment on this analysis.