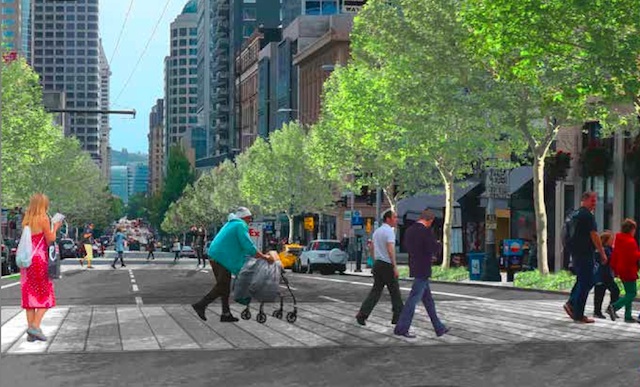 The Downtown Seattle Association has put together an impressive plan for improving walkability in the downtown core, specifically around the Pike-Pine district between Pike Market and I-5. The plan calls for spending $27 million to $54 million on trees, sidewalks, and planters to improve the streetscape. It seems like a modest price to pay to have what looks like a really nice downtown.  You can check out the website for more info and to read the whole vision.

Though transit is not specifically discussed in the report, it’s always struck me that the Pike-Pine couplet could be much better for buses. As with most East-West routes in Seattle, buses are slow through Pike-Pine, especially during rush hour, and the extra left-right jog at Bellevue slows things further.

Pike-Pine didn’t make it into the Transit Master Plan as a priority* corridor. Planners prioritized Madison for connecting downtown and the Hill by bus, perhaps thinking that Pike-Pine would lose salience as light rail took riders between Westlake and Broadway. My hunch, though, is that Pike-Pine will continue to be important. The corridor between the Market and, say, 12th Avenue, is arguably the most vibrant and walkable stretch in all of Seattle,  despite the incline. Even with light rail, there will still be a need to bus between the southern end of the Hill, Downtown, and destinations in-between.

Currently about 21,000 daily riders move through Pike-Pine, according to 2012 data from Metro. With a bit of trolley wire investment, and maybe even a dedicated lane, buses could move much more freely along the corridor. Moving Route 2 to Pike/Pine, as David suggested in his frequent network proposal, would increase ridership further.  This is an important corridor, and it should be treated as such.

Anyway, even if we don’t get a Pike-Pine busway in the near future, downtown business should still definitely invest in making the streets nicer and more interesting.

108 Replies to “Placemaking and Transit on Pike-Pine”