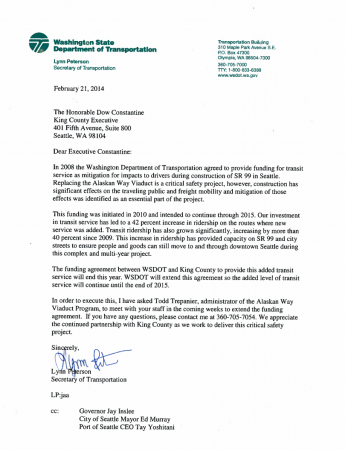 This weekend, we heard a rumor that WSDOT had found the money to fulfill their promise of viaduct mitigation funding through the opening of the SR99 Deep Bore Tunnel, scheduled for the end of 2015, a commitment which had been cast into doubt a couple of years ago.

This money, which amounted to about 40,000 hours of Metro service per year, was intended to provide drivers an alternative to driving on SR99, and to compensate Metro for increased running times on SR99 routes. Metro had used the money to improve schedule reliability on West Seattle routes, and add trips to high-performing commuter and all-day service in West Seattle, Ballard, and on Aurora. Those added peak trips are packed full of riders, so premature loss of this funding would have resulted in a “pre-bloodbath bloodbath” of cuts in July, falling extremely hard on West Seattle.

The potential loss of this mitigation money was one of the two fiscal swords hanging over Metro this year. The other, even larger one which remains, is the structural post-recession deficit of 600,000 hours per year. King County voters will get a chance to vote on additional revenue for Metro in April.

“This is great news for everyone who commutes on the SR99 corridor, especially those coming from West Seattle and Burien,” says King County Executive Dow Constantine. “Viaduct mitigation has reduced traffic and increased transit use, and will continue to help manage the impacts of construction on businesses and the traveling public.”

17 Replies to “WSDOT Comes Through with Promised SR99 Money”