I didn’t attend the South Bellevue Station Open House last month, but the materials are online. They are largely focused on appeasing people afraid of density — “No Transit Oriented Development” is prominently printed on the fifth slide, and there are lots of words about mitigation.

Although STB is not friendly to park-and-rides, especially when free to use and publicly funded, a few stations in a system can function primarily as a useful transfer point for buses and access point for cars. Positioned at an elbow in the line; on the way to Downtown Bellevue; and with limited walkshed, neighbors hostile to density, and decent highway access, South Bellevue is one of the points where parking is least objectionable.

With 1,500 stalls, ST projects 4,500 boardings per day at this station in 2030, which (in an apples-to-oranges comparison) would have ranked fourth in 2012. Projected travel times are 14 minutes to Chinatown, 16 to Overlake, 24 to UW, and 49 to Seatac. The UW time is actually a couple of minutes faster than the afternoon scheduled time for the 556, and the Seatac run is at the high end of the scheduled range of the much less frequent (but more direct) 560, for whatever that’s worth.

The parking, as it should be, is behind the station rather than hiding the train from the street: 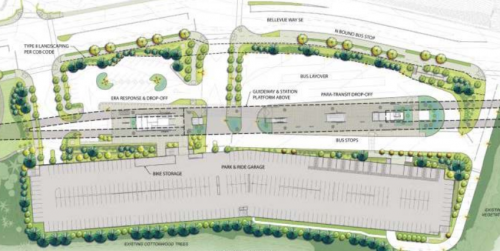 Sound Transit seems to have learned the lessons of poor station designs in the past, hitting both my hobby horses: center platforms and multiple, dispersed entry points. The center platform will be especially useful if South Bellevue one day becomes a transfer point to an Issaquah line. 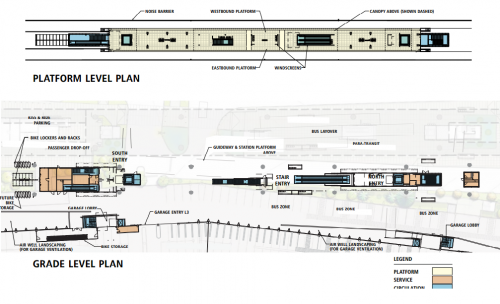 If anyone attended the meeting and can share their impressions about the crowd, please do so in the comments.