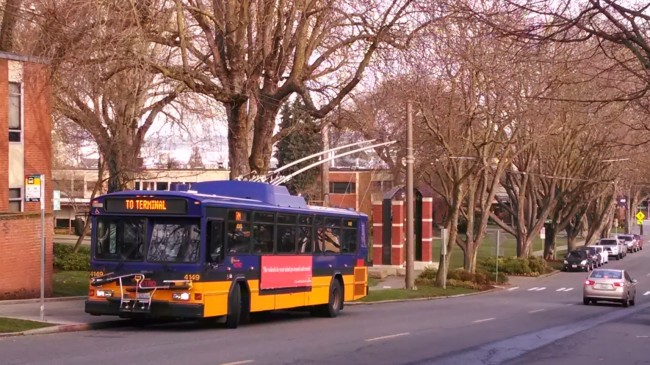 Two small but significant trolleybus improvements are in the works for Queen Anne, both of them painfully obvious time- and money-saving optimizations to the overhead wire network that should probably have been built decades ago, but which I am overjoyed are finally happening. (“Better late than never” is the watchword of the STB Metro beat).

Under construction now is inbound trolleybus wire on Denny Way for Routes 1, 2, and 13. This is part of an SDOT-funded project, called the Uptown-Belltown Transit Improvement Project, which I’ve covered from its incipience, and which also brought us the new bus lane on Broad St. The new trolleybus wire will allow inbound trolley coaches to use Denny, just like diesel coaches have done for decades, and will save riders about two minutes per inbound trip. Construction is estimated to wrap up in late April, followed by a period of testing before Metro coaches switch to using the wire in-service. The eastbound Denny & Warren stop will be moved a block east, and upgraded with improved facilities.

The estimated cost of the project (which will likely change somewhat as construction goes on) is around $1.5 million. It’s worth pausing to mull his number for a moment: $1.5 million, for two minutes per day saved by thousands of riders from Queen Anne and Uptown, for the foreseeable future. The various Ballard rail options differ in travel times by about eight minutes per direction and in cost by billions of dollars. Obviously this comparison is somewhat apples to oranges: any of those alignments would serve far more people per day, and all aspire to provide a Rapid Transit level of service, which, if successful, provides more benefit per rider. Nevertheless, this frames a crucial point: any remotely sensible bus improvement on a well-used route will be amazingly cost-effective.

The final part of this project, a traffic study to evaluate whether outbound coaches could use a bus-only signal at 3rd & Denny, is ongoing.

On the other side of the hill, Metro is designing a new trolleybus layover bay near Seattle Pacific University, on the Route 13 terminal loop. This additional layover bay will allow Routes 3 & 4 to be extended from their current vestigial terminal loops in East and North Queen Anne to Seattle Pacific University, at minimal (but not quite zero) operational cost. SPU is a transfer point when travelling between Queen Anne and the U-District, and a ridership center in its own right. SPU lost its primary downtown route in the 2012 restructure, and extending frequent service from the top of Queen Anne to SPU is a boon not just for that area, but for overall network connectivity and comprehensibility.

Metro has funds for both design and construction of the new layover bay; I don’t have a cost estimate, but construction is expected to happen next year. I commend Metro management for funding this project, even in the face of parlous and debilitating uncertainty over future levels of available revenue.