It turns out the Eastside Rail Corridor is good for at most 5,000 daily riders as a commuter rail line, which is about one rider for every blog post and op-ed that’s been written about it since BNSF decided to sell it a few years back.

That’s one of many things we learn from Sound Transit’s study of high-capacity corridors on the Eastside released last week. The study looked at two corridors in particular, the former BNSF corridor and I-405. As you can see from the chart below, the ERC doesn’t perform nearly as well as I-405 does. 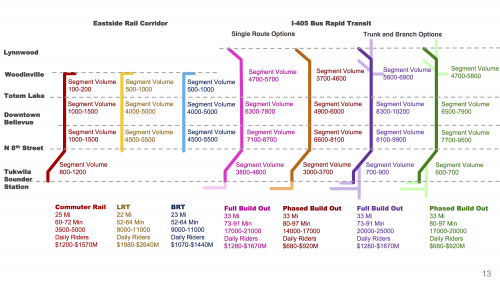 There are several reasons for this. The less expensive version of the ERC alternative is single-tracked, which means trains could only run as often as once every 20 minutes. Ripping out the tracks and installing BRT or light rail improves ridership, but at greater cost (and encounters some issues with a narrow right-of-way).

But perhaps the biggest take-away from the 405 vs. ERC bake-off is the importance of path dependence. BRT on 405 is cost effective mainly because Sound Transit and WSDOT have already made massive investments in the form of HOV lanes and park-and-rides. ST has already invested $350M in the corridor and WSDOT is likely to spend as much as another $1.4B adding HOT lanes to improve bus and carpool reliability. So BRT ends up looking cheap, but only if you ignore the billions already spent on widening I-405 over the last decade.

Nevertheless, the cost-effectiveness means this is probably the end for the ERC as a viable Eastside transit option. It was a compelling idea – a nearly unbroken right-of-way through the Eastside just waiting to be redeveloped. But compared to the alternatives, it just doesn’t pencil.

Which leaves us with 405, and BRT. Should WSDOT move forward with the express toll lane project, BRT would have great reliability and decent ridership at relatively low cost. Sound Transit looked at two BRT options on 405. The first is a single line going from Lynwood to SeaTac – essentially all of 405. Buses would run every 10 minutes at peak. The other option is an intriguing trunk-and-branch setup, where feeder lines throughout the eastside would combine for 5-7 minute headways in the central Eastside. The second option would add another 4,000 riders, but cost nearly 50% more to operate.

The sad part about any kind of transit on 405, of course, is the abysmal walkshed. With a few exceptions (Bellevue Transit Center), the walk shed around most of the proposed stations makes Mt. Baker seem like a walker’s paradise. Great for park-and-rides, but not much else. But again, you build BRT with the infrastructure you have.

The full presentation is below.

97 Replies to “Path Dependence: HCT on the Eastside”