Last week the Seattle Council’s Planning, Land Use, and Sustainability (PLUS) committee once again took up the North Rainier Rezone, last seen inspiring a diverse set of public comments earlier this month. There were more public comments that are by now quite repetitive, although the latest tactic is calling for yet another 2-year delay while companion parks, economic development, and transportation plans develop. I predict approximately zero current opponents would suddenly accept the plan then, as it still won’t address their fundamental desire to limit the number of low-income neighbors and preserve effortless parking at local businesses. Meanwhile, rents spiral upward and the Rainier Valley continues to suffer.

1) Amend the proposed zoning to exclude the parking maximums currently operative in other “Seattle Mixed” Zones (basically just South Lake Union and Lower Queen Anne). This triggers the required change in the bill title, and addresses the fear that the proposed maxima “might be too low” for certain businesses, like grocery stores, envisioned for the area. 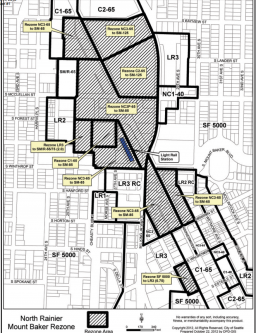 2) Change the “Class I” pedestrian street designation to “Class II”  on McClellan and Rainier. Class II allows “more flexibility” for street interface. It would keep transparency requirements, but permits more uses at ground level for a “greater range of businesses.” Rather than forcing nothing but eat/drink and retail, health care, light industrial, and office applications would also be allowed on the first floor — but not residential. The council is concerned about vacant storefronts, reflecting many comments from residents.

Even Class I setbacks are flexible in the design review process, but Class II allows 12 ft. setbacks as a matter of course. DPD thought “more suburban, less active” might be appropriate given the traffic on these streets. Notably, on-street parking on these streets would improve the pedestrian environment, possible if SDOT uses the “bowtie” street reconfiguration here to greatly improve bus/rail transfers.

3) The committee added a few blocks east of MLK and north of McClellan to the upzone (the blocks labeled LR3 and NC1-40 in the upper right), due to a request from the landowner, the nonprofit Mt. Baker Housing Association. These parcels are already developed to LR3 (Low Rise-3), but MBHA would like to tear this down, add more affordable housing, and simultaneously deal with residual contamination from a dry cleaning business there. The parcels would become MR2 (Midrise 2) and SM-65 (Seattle Mixed 65′), respectively.

From my perspective, these three amendments range from wonderful to mixed. The expanded housing on the MBHA site is unmitigated good news. Meanwhile, it’s clear that parking minimums create a whole suite of bad effects, but maximums are debatable, particularly in a place where redevelopment might take a while to get off the ground. As for the pedestrian classification, allowing a broader diversity of businesses is probably a good idea.

The Harrell amendment, on which the committee decided to delay deliberations until Mr. Harrell could be there to discuss it, would lower the 125′ limit on the Lowe’s site to 85′, although a contract rezone could raise it again once the City knew would would go in. As always, height is a flash point, but this amendment would simply reduce the site’s potential and add yet more veto points to its best possible use. DPD believes residential will not utilize 125′ under current conditions. Reducing the height will make residential more competitive, and is likely to subvert the often-expressed community wish for the site to be focused on job creation.

Mr. Burgess specifically asked for neighborhood feedback on this amendment, via public comment at the next meeting or via email. Let him know what you think.

Mr. O’Brien closed by asking about the lot immediately south of the station but not affected by the rezone, currently LR3-RC. Across a quiet street from the station, any sensible framework would upzone these extremely aggressively. Last decade these blocks fell out of the plan because they might cast shadows on deserted Cheasty Blvd., there were single family homes on the other side of the greenbelt, and there were commercial uses nearby that have since largely disappeared. I wish I was joking about any of these “problems.”

Since this terrible decision, the status of these blocks has changed. Capitol Hill Housing purchased the southern block. The northern block will be split between an underground King county sewer overflow storage tank (!!!! – hopefully it’s buildable above) and a northern half split among several parcels. Mr. O’Brien asked for input from DPD and the public about making some or all of this area SM-85 or SM-65. Good for Mr. O’Brien to bring up this common-sense revision. Thank him and let him know this is a good idea.

As a side note, Lyle Bicknell of DPD said there is already interest in redeveloping the Rite Aid/QFC site immediately north of the station while preserving those tenants. Good news!