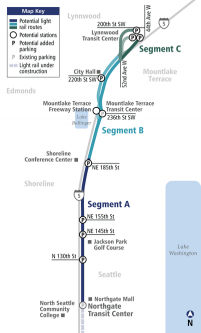 Those affected by, and interested in, the planned construction of light rail on the Lynnwood Link Corridor are encouraged to attend a series of community meetings related to planning for the two station areas in Shoreline, adjacent I-5 at 145th St and 185th St.

The topic of these meetings will be the Draft Environmental Impact Statement (DEIS) for 185th Street, and a Design Workshop for the 145th Station near Jackson Park. The meetings will be held at Shoreline City Hall on Midvale Avenue and N 175th Street. Shoreline City Hall is accessible via King County Metro routes 301, 348 (with a short walk from N 185th) and RapidRide E, 301, and 348.

The 145th Street Light Rail Station Design Workshop (flyer) will take place from 18:00 – 20:00 on June 12th. The design workshop appears to be looking for ideas to improve pedestrian and bicycle access to and from the light rail facility within the mobility study area. Similar to the walking tours around the 185th Street Station Subarea, a 145th Street Station Subarea walking tour is planned for June 27th (14:00 – 16:00).

Tim McCall is a resident of Shoreline.