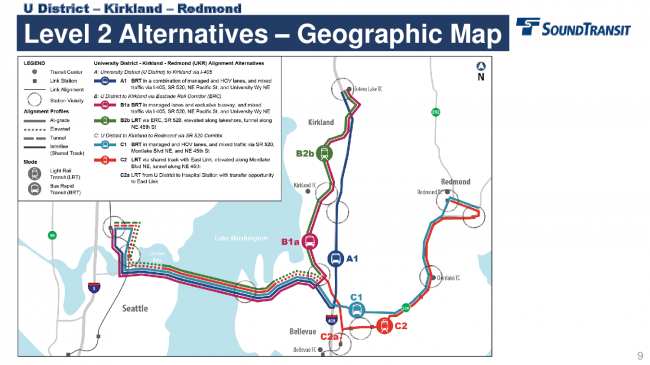 Sound Transit’s Executive Committee met earlier this month and discussed preliminary analysis of the entire corridor from Ballard to the Eastside via SR 520. Unlike the Ballard/UW segment I discussed on Saturday, continuing to the Eastside involves extraordinary technical challenges, fundamental geometric dilemmas, and relatively mediocre ridership. In a few days we’ll report on the possibilities to connect Kirkland, Bellevue, and Issaquah.

The geometric problem is that no destination obviously dominates. Bellevue is the largest city but is already well served by East Link. Redmond is probably the cheapest to serve, but is also a peculiar place for two light rail lines to converge. Kirkland is the city with no planned high-capacity transit, but it is difficult to serve its dense areas.

There are three light rail options. All of them tunnel on 45th St. after U-District station, run elevated down Montlake Blvd, and elevated for a short run east of the bridge. All other segments are at-grade.

B2b turns north to serve Kirkland to Totem Lake, via the Eastside Rail Corridor.  At $2.1-2.9 billion, this most expensive option would generate only 7000-9000 riders and take 18-23 minutes end-to-end.  Although it makes sense to use existing right-of-way between stations, it seems this corridor will only make sense if the line deviates into dense neighborhoods near station areas.

What makes these largely at-grade options relatively expensive is the enormous complexity of getting from U-District Station onto the 520 bridge deck without using the overtasked U-Link tunnel. Traversing the UW campus reopens old agreements, various concerns about labs, tribal burial grounds, wetlands, utility lines, and views. A new Montlake cut crossing is expensive and introduces possible environmental and view impacts in an area with a very litigious track record. And of course, there’s the expanded bridge deck on SR520 itself.

Of the three communities, I’m most sympathetic to the need to serve Kirkland. However, wedding it to a highly problematic 520 crossing may not be feasible. The money spent on this crossing might better be used to deviate from the Eastside Rail Corridor where necessary to serve the true ridership generators in Kirkland. 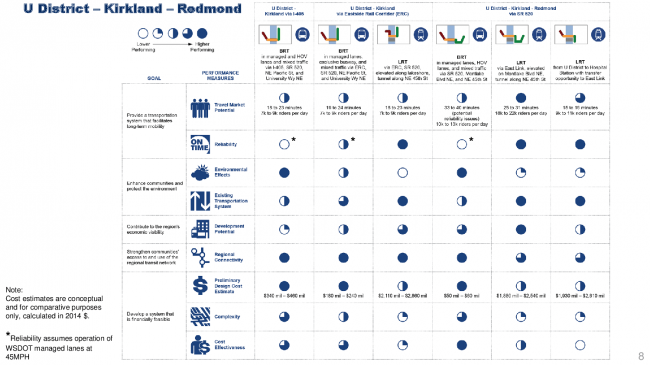