The Ballard to University District line is why I got involved in transit advocacy in the first place. In November 2011, I was frustrated with the lack of progress on getting rail to Ballard and created The Ballard Spur Facebook page with a nice graphic made by my friend Cathy Rundell. Within a week I was getting calls from local papers who were intrigued by the idea and wanted more information, a true testament to how starved this town is for high quality transit. Soon I joined forces with Seattle Subway, and with a lot of help, we got the powers that be to get moving on transit relief for our city.

The fruit of our labor:  The Ballard to University District study is available for review and the year is 2014 – NOT 2020.

When reviewing options for high capacity transit, Seattle Subway starts by throwing out all the options that are not 100% grade separated because any portion of the line that interacts with traffic subverts the speed, reliability, and utility of the whole line. Unfortunately, that leaves us with only one presented option: Alternative A3, titled “via Wallingford Tunnel.”

A3 is a very good start. It is fully grade separated and very fast. Travel time would be as low as just 6 minutes, ridership as high as 26,000/day, and the cost would be just under $1.4-1.9 Billion. This corridor is the highest performing in cost per rider of any corridor Sound Transit has studied so far.

The Ballard Spur (Alternative “A4”)

A3 does have one glaring weakness, however: it needs more stations. A density map of that part of Seattle shows that several dense areas along the A3 alignment would be ideal for walking, biking, and transit connections if Sound Transit carefully located the stations.  A3 offers only one station in the 3.5 miles between Ballard and the University District. This stop spacing is too suburban for an area with many dense neighborhoods and attractions. Closer stops would maximize the utility for both pedestrian access and transfers from other modes.  This corridor is dense enough to justify full subway spacing of stops — which would mean full coverage of the corridor by the new line, replacing the need for the slow-as-molasses 44.

The good news is that adding just two stations and moving the Wallingford Station would maximize connections to both attractions and transit.

The Ballard Spur (Alternative “A4”) adds the following stations to Alternative A3:

What do all of these locations have in common? They are walkable from a station that stretches between Aurora and Fremont Ave N with station entrances located on either side. This area is densely populated and has more people in its walkshed than the Wallingford Station pictured in A3. It would provide an easy connection to attractions in North Fremont as well as the Woodland Park Zoo and East Wallingford. It also would add direct connections from buses traveling along the Aurora corridor, Fremont Ave N, and Phinney Ave N.   A station at this location with well placed entrances would also expand its walkshed by making the station easily accessible from both sides of Aurora despite the hill and busy arterial (46th.)  Sound Transit MUST add this station

This station should be located to the east of 8th and Market and would serve people to the east of the 17th/Market walkshed as well as act as a connection for buses travelling on 8th Ave NW.  When compared to the blockbuster stations on this line like 17th/Market, Aurora, and University District – this stop doesn’t rate well.  That said, take another look at the residential density map – more people live near this stop than any of the current Link stations in the Rainier Valley.   This station would would also have good connectivity to buses that travel north/south on 8th such as the 28 and could possibly be built at a lower price due to a likely shallow tunnel at this location and less of a need to add frills to the station design.     Additionally, we think it’s critical to not view this stop in isolation, this station is required to fully connect the walkshed in highest priority corridor in Washington State.  For this reason alone Sound Transit must add this station.

The Ballard Spur (Alternative “A4”) also moves the Wallingford station. This station should be located in the center of Wallingford so that it is walkable from all sides. West Wallingford where the station is currently located will be covered by the North Fremont/Zoo station – so it makes sense to move it east.  45th and Meridian is a good starting point for analysis. The goal of this station is to be within the bike/walkshed of nearly all of entertainment district of Wallingford.

The station layout we recommend above would mean total coverage of this dense east-west corridor and a likely travel time under 10 minutes. Currently, that time isn’t possible without a helicopter.  It is our opinion that each of these stations would significantly add to the utility and ridership of this line. We believe that this stop spacing will deliver maximum benefit for the cost of adding just two stops. We only get one chance to build this: let’s build the best option possible.  Let’s build the Ballard Spur! 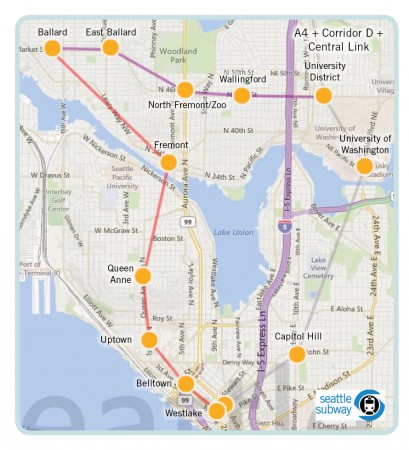 After the two rounds of public input on Ballard to Downtown, Corridor D was clearly the most popular line, with 76% of the support in public comment. If Corridor D is built, the Ballard Spur (Alternative “A4”) is the clear winner for UW to Ballard, as lower Fremont will already have a station. However, if Corrridor D is impossible to build for engineering or budgetary reasons, we need a fallback route for Ballard to UW that is fully grade separated and serves lower Fremont in route to Ballard.

That is why we need Sound Transit to study a tunnel in the C1 alignment. Alignment C1 shows an elevated path along 45th through Wallingford, then turns south to lower Fremont via Stone Way and uses a N 36th Street and Leary Way alignment to Ballard.

Unlike the Ballard to Downtown study, there is no specific comment period for this study, as it was done primarily to inform the board. Nevertheless, you can voice your opinions to the ST board at this email:  EmailTheBoard@soundtransit.org

You can also send your comments to LongRangePlan@soundtransit.org as this study is part of the long range plan.

What to say to ST in your comments

1.  I want The Ballard Spur “A4!”  — A3 is the best option presented, but ST needs to add stations at East Ballard and Aurora and move the Wallingford station east.

2.  ST needs to study a fully grade separated version of Level 2 Alternative C1 in case it is not possible to build Corridor D from the Ballard to Downtown Study.

3.  Building the best line possible is the most important consideration in this corridor as it is the highest value transit corridor that does not already have rail planned in Washington State.

5.  Design the Ballard to UW line so that it can be extended both east and west in the future.

Keith Kyle is the Outreach Director for Seattle Subway and is writing on their behalf. He has been a Sound Transit employee since 2004 and works in the IT division.  He is not involved in planning at Sound Transit, and is not representing the agency here in any way.