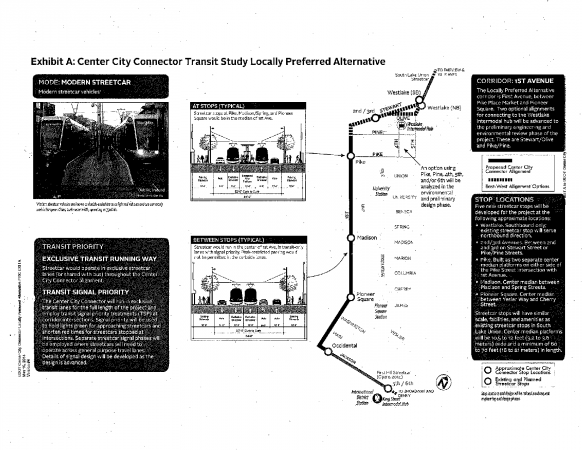 On Monday the Seattle Council first considered legislation that designates a “Preferred Alternative” for the Downtown Connector (also known as the First Avenue Streetcar) that would join the First Hill and South Lake Union Streetcar lines.

There was no drama on Monday. Councilmember Nick Licata requested a delay until the next Council meeting on July 21st, so that SDOT would have an opportunity to answer questions about some “issues” with the line. Mr. Licata expressed an interest in the comparison of alternate modes and what other projects might also be eligible for Federal Small Starts funding. Although in principle other modes could serve this corridor, given that two streetcar lines will already exist the transfer penalty is likely to be prohibitive.

The Council unanimously agreed to the delay, as SDOT would not apply for the Federal grant until early 2016. The grant may cover as much as $75m of the estimated $110m cost of the line. The legislation in no way funds construction of the line.

The preferred alternative (poorly xeroxed above) involves five new stops, and center-running, dedicated right of way with signal priority throughout the new segment. There will be two overlapping lines: Lake Union to King Street Station and Westlake to Capitol Hill. Each of these lines would have 10 minute headways every day through 7pm, and 15-20 minutes in the early morning and in the evening. Obviously, in the downtown core streetcars would come twice as often. The hours of operation would be Link-like, 5am-1am Monday-Saturday and 6am-11pm Sundays.

Frequent, all-day, high-capacity transit with priority, level boarding, drivers apart from passengers, and off-board payment is literally everything SDOT can do to make a transit line high-quality, short of grade-separating and boosting costs by an order of magnitude. Decisionmakers deserve our thanks for not finding excuses to shortchange transit, as they so often have in the past. With luck, the same principles can apply to the SLU, Jackson, and Broadway segments, where they are currently so lacking.

Councilmember Tom Rasmussen said SDOT expects the line to have 23,000-30,000 riders per day.