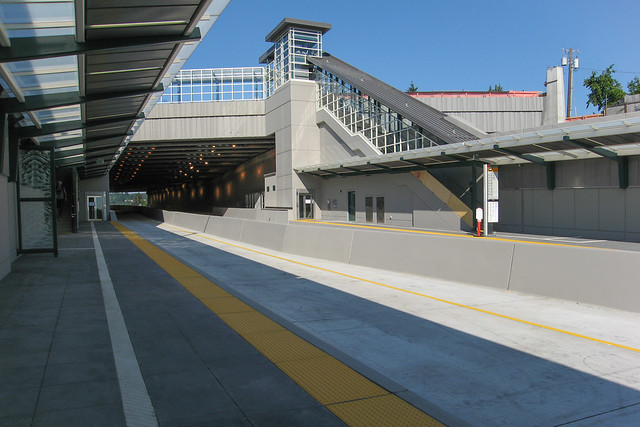 As part of the Eastside Transit and HOV project, WSDOT recently opened replacements for the Evergreen Point and Yarrow Point Freeway Stations. For the latter, Metro refers to the station as Clyde Hill/Yarrow Point but WSDOT refers to it as the 92nd Ave Transit Station. Regardless what name you call them, each of these stops are located in the center of the freeway and are a vast improvement over their former roadside counterparts. Evergreen Point opened June 16, and Yarrow opened July 14.

If you’ve used the freeway stops at the Mountlake Terrace Freeway Station, you’ll feel right at home at the new pair of stops on 520. There is a small plaza connecting to the roadway overpass and a pair of platforms in the median below. All platforms are completely weather protected. The platforms can accommodate at least three 60 foot coaches simultaneously, and there is enough shoulder space for coaches to pass each other. I measured sound levels and each station averaged around 74 dBC during commute hours. Mountlake Terrace was about 3dB higher, or twice as loud. Mountlake Terrace is surrounded by 10 lanes of traffic versus Evergreen and Yarrow’s four.

Both of the new stations have an elevator to each platform. Design of the elevator is excellent: the elevators have two doors. Any wheeled device can be wheeled in and wheeled out without the need to turn around inside the elevator. The elevators are large enough to comfortably accommodate two bicycles simultaneously (and possibly three uncomfortably). My only gripe is that a control panel could be installed at both doors instead of just one. Metro announced the opening of Yarrow Point but neglected to include that the elevators would be out of service for at least the first day. The stairs are missing runnels which made it difficult for me to lug my heavy bike down the stairs.

Wayfinding at the stations is poor. Since construction is not complete on Yarrow’s plaza, I will save judgment for a future day. However, Evergreen Point is devoid of wayfinding save for a pair of small signs (approximately 12 by 6 inches) mounted six feet in the air on lamp posts. If you’re familiar with the local geography it’s easy to look towards Lake Washington and know that buses headed in that direction will be Seattle-bound, but if you don’t make that connection or miss the small signs, you’ll have to head down to the platform. At the opposite end of the stairs you’ll see the new standard Metro “Windows 8 style” stop flag with tiles which lists each route and its destination along with the schedule.

There were bench placeholders in WSDOT’s designs. The benches are not the responsibility of the contractor though; they are for Metro to install once we had access, if not possession of the transit stop. The designs also include accommodations for adding other future amenities like off-board readers and PA systems for announcements.

Metro also plans to install benches at Yarrow in the coming weeks.

At Evergreen Point, the westbound stop is “temporarily closed” and the stop has moved just beyond the platform to the edge of the station. Metro added three of their shelters. This configuration seems odd, as there appears to be no difference in completeness between the platforms and looks like it is ready to be used today. WSDOT’s Media Lead Ian Sterling explains:

During construction of the project, the contractor is responsible for maintaining and cleaning until the full project is completed between Lake Washington and 108th Avenue Northeast. WSDOT and King County Metro are finalizing an agreement in which Metro will maintain and clean the stop. This is a typical arrangement for freeway transit stops.

When the new Evergreen Point station opened, both of the former Evergreen and Yarrow Point outside stops closed. At the request of Metro, the project contractor operated a shuttle between Evergreen Point and Yarrow Point during commute hours. I saw one of the shuttles: it was a black Suburban with a “Shuttle” decal on the doors (possibly UberBLACK). WSDOT did not have any ridership numbers at the time of my request.

Evergreen Point has 47 free parking spots in the station’s plaza, replacing the 50 stalls at the previous lot.

A collection of photos of the new stations can be found here.