Metro’s General Manager Kevin Desmond was pleased with the results produced by RapidRide C and D lines, noting that about 83 percent of the riders surveyed in those routes were either satisfied or very satisfied with the service.

“I’m proud of the ‘can-do’ Metro team that pulled it off,” Desmond said in a statement. “And very pleased that we brought a new level of transit service to the people we serve.”

The rider satisfaction numbers came via a new survey from Northwest Research Group, which found that about seven out of ten C Line riders (71%) said that the overall experience on RapidRide is better than other Metro services. In addition, almost three out of four D Line riders (72%) agreed that the overall experience on RapidRide D Line is better than the previous route. Riders from both lines were most positive about the frequency of service, service hours during the day, not having to rely on a pre-determined schedule, and the shelters and features at bus stops.  The survey does show that Metro has room to improve on other dimensions, however, such as rider safety perceptions, capacity, and ease of transferring.

Full report details after the jump.

RapidRide C and D lines launched in September 2012.  When riders were surveyed six months later, overall satisfaction with those lines were significantly lower than the routes they replaced. For example, on the “Overall satisfaction with RapidRide C Line” survey, 24 percent of respondents who the C Line answered “very satisfied” while 43 percent answered “somewhat satisfied.” Both figures were lower than the data collected on April 2012, when surveys conducted were on routes that the C Line eventually replaced, as 25 percent said they were very satisfied and 56 percent of respondents said they were somewhat satisfied. 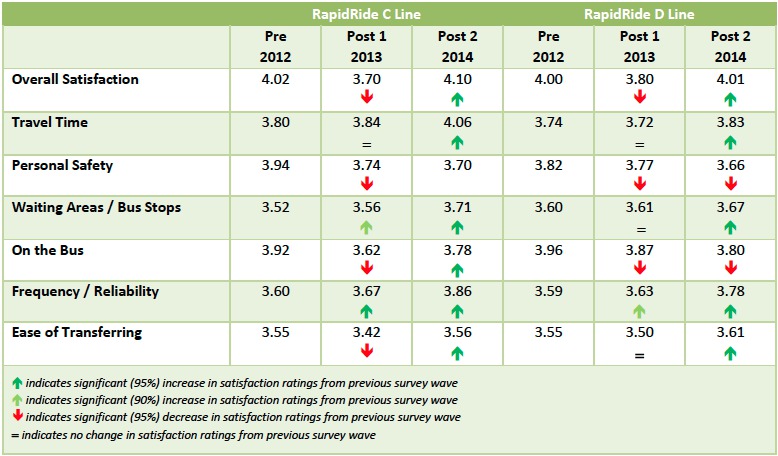 On the negative side, satisfaction levels with personal safety have decreased since the C and D lines were introduced, with the decrease being greater among D Line riders, which went from 3.82 before the service and 3.66 in 2014. The satisfaction levels for the comfort in riding the bus became lower with RapidRide for both lines, although the C Line had improved in 2014.

The most common concern that C Line riders had about their personal safety was waiting for the bus at night while D Line riders expressed concern about the behavior of other passengers on the bus. In the 2012 Survey Report, satisfaction with night time safety was said to be improving for all the routes in general. The 2012 report also suggested that buses serving Seattle/North King County and South County should focus on the behavior of passengers on the bus since about 24 percent in that particular survey avoid riding the bus due to safety concerns.

Satisfaction with transfers was also below-average, and the survey notes that “ratings for wait time when transferring are below average and are highly correlated with ratings for on-time performance.”

The survey also sheds light on some key differences between RapidRide C/D riders and Metro riders at large.  C and D riders average 39.5 years old, versus 45.5 for Metro riders as a whoole. Students make up about 13 percent of all riders in the C Line while the D line had about eight percent of riders being students in 2014. Students made up about nine percent of total ridership for all the routes combined in 2012, before the C and D lines were introduced.  The vast majority of the riders for the C & D lines use the services as means of commuting to and from work, making up over 2/3 of all surveyed riders. This compares with 58 percent of all riders.

Overall satisfaction with frequency and reliability of service on RapidRide C Line has increased significantly each year since its introduction. Satisfaction with frequency and reliability is now the second highest rated dimension of service.  As for the D Line, the increase in satisfaction for the same category was somewhat higher in 2013 than the previous metro route and has increased significantly in 2014. C Line riders in particular were most satisfied with on-time performance as well as the frequency of services during peak hours. 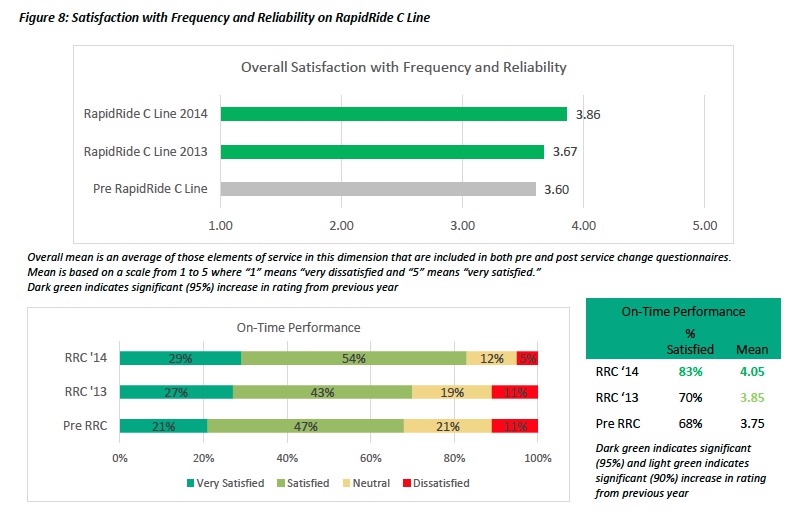 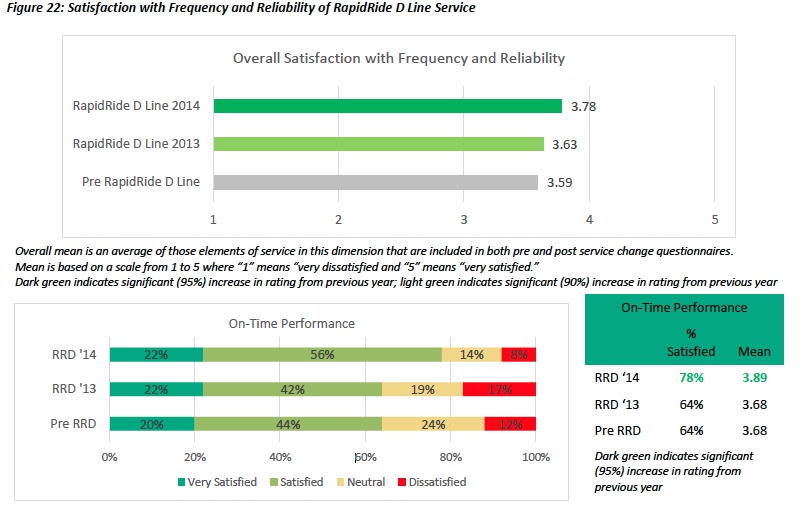