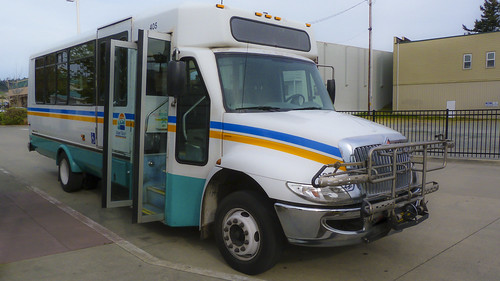 Good morning, it seems as if Island Transit is still in trouble after the resignation/retirement/firing of Island Transit’s executive director. In today’s Whidbey News-Times is an insubordinate letter to the editor by one Sandra Kuykendall, Acting Financial Manager of Island Transit. I’m going ahead and republishing her letter in full so you can see what I mean by insubordinate with my emphasis:

Scott Dudley and his dopes spewed bitter half-truths and intimidated our elected board officials to fire Martha Rose.

Bob Clay, Helen Price Johnson, Jim Campbell and the rest of you board members, do you really think making Martha a scapegoat and bowing to McCarthyism is going to make the silent majority vote for you next go-around? The answer is … oh no.

You and the state auditors saw the same false information that Martha did, and none of you raised a red flag either.

This error was so hidden that nobody, including the state auditors, to whom we pay tens of thousands of dollars every year to catch this type of an error, recognized it.

Most of us who worked with Martha over the years are all angry and shocked that this type of a lynching was approved by the board, especially before even getting the audit report.

Martha built this organization into a national award–winning agency and worked for years getting the grants to build this much-needed facility. The angry “employees” that write letters to the editor are 90 percent disgruntled ex-employees who were fired for not doing their jobs.

Martha has given her heart to this community and fell prey to an incompetent finance manager.

Once she recognized the problem, she took strong action to pull our agency out of a financial nose dive. And she developed a financial plan that could do it. We couldn’t be in a more precarious point in our recovery to lose her guidance now. We, and I speak for most of the employees of Island Transit, are heartbroken, disillusioned and disgusted at you self-serving politicians. What is the world coming to where McCarthyism is allowed to be practiced?

Folks, let me be clear here: To publicly call an Island Transit Board Member a bully and then to accuse individual citizens using their First Amendment Rights of being McCarthyite dopes – and for you young ones, that’s a serious charge from the Cold War and the Red Scare of the early 1950s leading to many good folks losing their jobs & reputations. Anybody who listens to Mr. Lauderdale’s speech can see he’s no McCarthyite but a US Navy veteran using the 1st Amendment of the US Constitution. Below are his remarks from Friday:

Let me also add when a public official uses her position to blast members of public plus her elected board and sign a letter with that title, watch your liberty! You heard me – watch your liberty! When government officials publicly abuse members of the public for speaking out not just in print but by walking out – well then who’s next? Would it be okay for a Sound Transit Sounder manager to blast Seattle Transit Blog for criticizing Sounder North? Would it be okay with you Seattle Transit Blog readers for transit board officials to work to limit us at public comment?

After all, if a former US Navy Commander cannot tell his elected officials what he thinks about Island Transit without fear of Island Transit officials working to destroy his reputation and accuse him of lynching… then we as Americans have something fundamental to fear.  There are many great Americans who love America and want to serve but distrust their government because of tiny people with big titles like Sandra Kuykendall.

Let me put it this way: We at Seattle Transit Blog have read reports of intimidated employees in the comment threads (an example) and even hyperlinked a letter sent to the State Auditor’s Office via State Senator Barbara Bailey alleging the real McCarthyism is led by Martha Rose and her pet attack dogs.  With Sandra’s disgusting outburst speaking as an Island Transit employee to silence fellow American citizens, it lends credence to these allegations.  So what do we do here at home while our troops are risking their lives to stop ISIS ‘Over There’ and our First Responders are ready to protect the home front?  In the words of one VAQ-139 Cougar currently preparing to do battle over the Middle East:

We are all Americans enjoying our great freedoms and rights thanks to the military and the firefighters/EMTs/police officers who serve and protect us…NOT ONLY today, NOT ONLY on the Anniversary of 9/11 but EVERY SINGLE DAY of our lives. CHOOSE to keep those flags flying, CHOOSE to be a proud American Patriot, CHOOSE to keep that spirit alive, and in doing this we will HONOR all of those we lost on 9/11 and all of the troops who have made the ultimate sacrifice NOT ONLY TODAY but ALWAYS!

Today there is an Island Transit Emergency Meeting at 4 PM/1600 Hours at their HQ.  I would highly advise Island County Residents to fire this monster in your midst and clean up your honour before 38 other counties have to.  Why?  Proud American Patriots should ensure this aggression will not stand.

One last thing: Already now former Executive Director Martha Rose admitted on public record there would likely be an audit finding last Thursday due to inept record keeping.  Why wait for the State Auditor’s Office report Sandra?  Some lynching…