On urban bus routes, interior capacity is often cited as a pressing issue. A frequently proposed solution is to reconfigure the interior of transit vehicles to use more aisle-facing seats instead of forward-facing benches. In theory, aisle-facing seats use up less space, which provides more interior standing room and space to maneuver the carts, strollers, and various objects customers bring on board.

This picture was taken aboard an evening-peak NABI 60-BRT vehicle on the MAX route, operated by Transfort (Fort Collins, Colorado). In front of the rear wheel-well is a forward-facing pair of seats, with three aisle-facing seats occupying the wheelchair securement location. According to the website of the seat manufacturer, transverse (forward-facing) rows are manufactured to be between 35-37 inches in width, resulting in an individual seat width of 17 to 19 inches.

If airline seating statistics are a good guide, the 95th percentile male transit passenger (the traditional seat design maximum [minimum is 5th percentile female]) will have a distance from the rear of their pelvis to the front of their knees of about 24 to 28 inches.

A passenger’s foot is. . . about a foot in length (you don’t say)! The seat back is about 2 to 3 inches at the top, sloping outward to be about 4-6 inches from the sidewall at the lumbar support. All together, a seat protruded 4 to 6 inches supports a customer with a pelvis-to-knee distance of 24 to 28 inches, with their foot protruding another 10 inches or so (subtracting dimensions counted twice), giving an overall protrusion of 38 to over 44 inches in length, more extreme than the 36 inches cited as the width of a transverse pair of seats.

In a transverse row, customers face the head of the person in front of them; in an aisle-facing seat, customers face standing passengers in the aisle. For obvious reasons, seated passengers don’t like to stare at the crotches of standing strangers; the eyes of a customer looking forward in an aisle seat is at roughly the same height as the crotch of the standing passenger. Customers also don’t like to have their foot stepped on or rolled over by other people, and expect the same consideration in return. As a result, standing passengers are placed in more uncomfortable situations, attempting to navigate the feet of seated passengers potentially with wheeled objects, resulting in passenger friction.

In crowded spaces such as a standing-room-only transit vehicle, people have a natural incentive to carve out personal space for themselves. In this example, the customer’s legs are bent slightly inward; on a more crowded vehicle, they may attempt to bend their legs outward to capture as much space as they can socially get away with.

By design, the foot of a customer in a transverse seat is underneath the seat in front of them. In an aisle-facing seat, empty space is created above their foot; in order to “use” this space a standee would have to awkwardly bow in to the seated passenger. While their feet could interlock, the desires of customers to maintain a personal space bubble as well as be able to stand up at their stop means this isn’t likely to occur between strangers.

This post isn’t to say that transverse seating doesn’t lack faults, the key one being legroom, but that solutions which involve converting more seats to aisle-facing should be given more scrutiny. In certain locations, primarily over wheel-wells and in wheelchair securement locations, aisle-facing seats are the only practical solution.

In comparison, a preferred alternative way to increase standing capacity is below. The most notable tradeoff is the reduction in seating capacity; aisle-facing seats can be substituted at roughly a 4:3 ratio, but removing transverse seats is a 2:1 reduction. 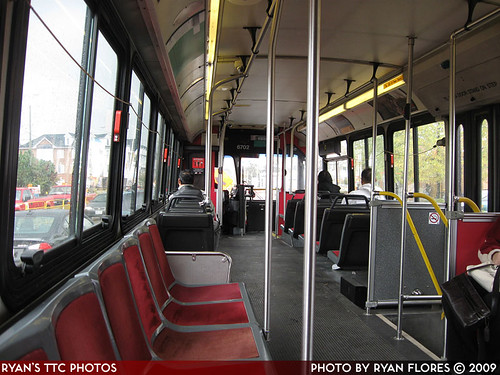 53 Replies to “The Space Fallacy of Aisle-Facing Seating”