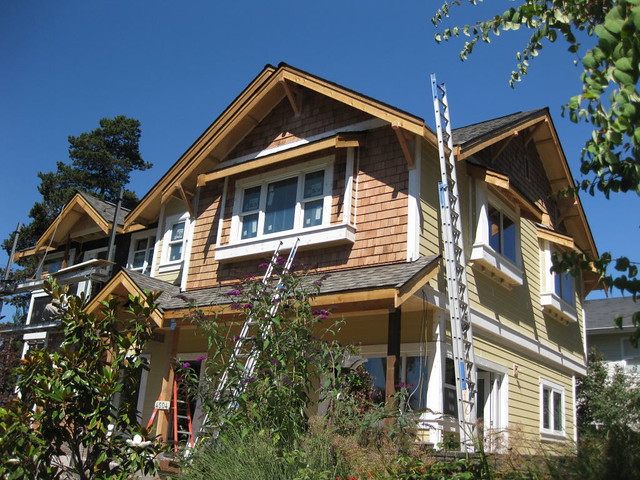 As Mayor Murray pivots toward Seattle’s affordable housing problem with one of his famous mega-committees, a pair of op-eds in favor of more housing appear in the Seattle Times and the DJC.

Job growth and Seattle’s desirability as a place to live keep pushing up demand, which leads to higher housing costs. Close to 44,000 people moved to Seattle in the past four years and another 120,000 are projected to arrive during the next 20.

Housing development also ballooned in recent years: Builders added 35,600 homes, including houses and apartments, from 2005 to 2013. Without those homes, housing costs would be even higher.

The city’s rapid growth demonstrates its capacity to accommodate new residents. Increasingly, they are single people living alone, and poor people and families are on their way out.

City officials say they want affordable housing for all and that housing should be fair and equitable — important ideals. But what’s clear is that Seattle needs more housing that is subsidized and market-rate.

Next, the head of the Master Builders in the DJC wants more construction, and don’t seem particularly concerned whether it’s infill or sprawl.

Running counter to Vision 2040 and the Growth Management Act, many jurisdictions in the Central Puget Sound area are resisting new growth and urban density, making it difficult to provide new housing. In some cases, local governments are acting in response to local activists opposed to growth.

In Seattle, infill development remains the primary option for accommodating growth. However, an ordinance adopted in 2012 made it much harder to build on smaller lots — one of several actions reducing the buildable land supply in the city without adding an adequate supply of new housing to the equation.

In King and Snohomish counties the current buildable land is expensive or significantly impacted by environmental constraints. Regulations such as critical areas ordinances, and stormwater and floodplain rules, create added layers of no-build areas inside UGAs.

This is worryingly plausible: if the Puget Sound’s cities can’t meet the housing demand, then the Cascade foothills are likely to take the brunt of it instead.

As far as the commission goes, it’s a mixed bag. As I’ve noted in the past, the Murray Doctrine is predictable (but effective!): gather as many people as possible onto a committee and find a way to give everyone something. Mark Schmitt, in a seminal 2007 article on Barack Obama’s “theory of change,” articulated the committee strategy thusly:

One way to deal with [conservatives’] bad-faith opposition is to draw the person in, treat them as if they were operating in good faith, and draw them into a conversation about how they actually would solve the problem. If they have nothing, it shows. And that’s not a tactic of bipartisan Washington idealists — it’s a hard-nosed tactic of community organizers, who are acutely aware of power and conflict. It’s how you deal with people with intractable demands — put ‘em on a committee. Then define the committee’s mission your way.

That’s all well and good, but I do worry that the committee strategy might hit the skids this time around. With taxis and the minimum wage, there were real, specific stakes (legalizing Uber, $15/hour) that could demonstrably be achieved or not. Those stakes acted as a forcing function, leading the committees to a resolution. The affordable housing committee, by contrast, could easily produce a report full of blue-ribbon bromides (“create partnerships with local institutions to blah blah blah”) that have little practical effect.  The Mayor seems fully aware of the challenge.

If I were on the committee (and I’m willing to serve if asked!), I’d want a real working definition of “affordable housing” and a specific legislation to achieve it. I’ve suggested such metrics in the past, but I’m more than happy to accept alternative definitions as well.

22 Replies to “Affordable Housing: More Cranes in the Air?”