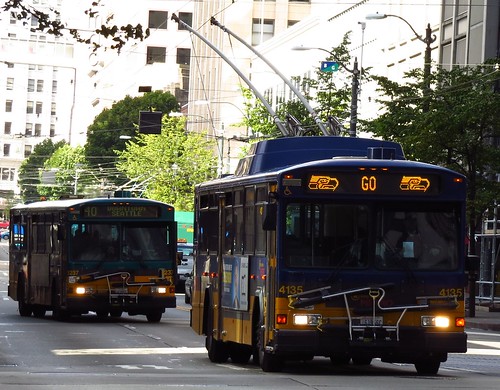 In May Mayor Murray unveiled Proposition 1 to avert the 2015 and 2016 Metro cuts for routes largely in the City of Seattle. With the planned cuts withering away quickly, and possibly disappearing altogether, that purpose suddenly became untenable. Without skipping a beat, the campaign switched to the narrative that this service would buy more bus service.

The measure text, thankfully, considers this possibility. After first maintaining the October 2014 service level, and allotting small sums for “regional partnerships” and access for low-income riders, the measure states that

…remaining revenues may then be used to address overcrowding, reliability, and service frequency within the City of Seattle through the purchase of additional Metro Transit bus service hours on routes with more than 80 percent of their stops within City of Seattle limits and consistent with the Seattle Transit Master Plan and Metro’s Service Guidelines.

There’s a lot to like here, a few things that could go either way, and one item that is not good.

Most importantly, the overall service level Metro provides Seattle is not adequate to provide frequent, all day service for high-demand corridors. It’s certainly true that less conservatism in preserving existing routes could achieve this at a lower cost than simply adding more service. However, even handing the whole system to David Lawson would require a 33% increase in service hours to reach the point of diminishing returns, after North Link opens and takes over significant load. We won’t get there with this measure, but Prop 1 is an important step to that service level.

Moreover, the legislation is clear. Seattle’s TMP doesn’t have a ton to say about service allocation, but Metro’s service guidelines do.  If followed, I have confidence that SDOT’s staff will assign new service hours in a very smart way. (See their preliminary list of affected routes here). This money will make transit in Seattle noticeably better. If King County and Seattle work harder to restructure the system at the same time, the cumulative effect will be revolutionary.

There is one clearly regrettable thing about this legislation: the language seems to prohibit the use of this money for capital improvements to improve transit speed and reliability*. There are many trips in Seattle where the problem is speed, not frequency. Where the problem is reliability, it’s better to simply make the street improvement and be done with it than to allocate bus hours every year just to keep the latter half of a route on schedule.

Sadly, these common-sense improvements are going to have to come in the Bridging the Gap renewal next year, where they’ll have to compete with potholes, sidewalks, and the Bike Master Plan for a limited pot of funds. On the other hand, maybe a Vehicle License Fee for speed and reliability isn’t actually an alternative: Seattle voters didn’t really care about such improvements and trounced a measure that was mostly about them in 2011.

There are also a number of things where it’s impossible to know how things will work out. Will the City Council be a good steward of the service guidelines when interest groups try to get back inefficient service** eliminated last month? Will new service really follow the guidelines or feed the squeaky wheels? Will a new Seattle Transit organization ultimately unravel King County Metro, and is that a good or bad thing for transit riders?

In the end the first point I made is the most important one: Seattle’s bus service needs, while finite, are larger than even this package can deliver. It is entirely reasonable that ordinary voters, not diving into the particulars of financial forecasting, might lose some trust in officials and resent that the threatened cuts didn’t materialize. However,they should set any such feelings aside and consider what’s best for the city, rather send a nebulous “message” to public officials by punishing riders.

* And specifically transit speed and reliability. New buses and streetcars are nice, but not what I’m arguing about here.

**I’m not saying that literally every September 2014 cut is undeserving compared to other priorities, but most of them are.