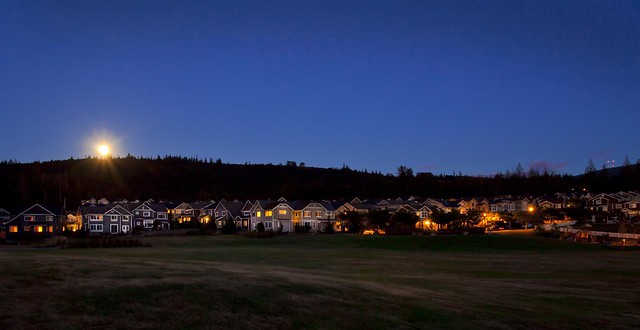 A few weeks ago, a neighbor of mine in the Issaquah Highlands noted that the 1,000-parking-space Park and Ride near our neighborhood was filled to capacity on a recent weekday. I got to thinking, if people wanted to use public transit in our relatively dense neighborhood, that park and ride is all we have. The majority of our neighborhood’s homes aren’t within 1/4 of a mile of the bus routes, and there’s a decent sized hill between many homes and the park and ride.

I decided to seek a rush hour shuttle service that would take people from where they live and get them to the park and ride, where there are several rush hour bus routes to Bellevue, Issaquah and Seattle. At a time of service cuts at Metro, there is no chance of a service expansion — in fact Metro recently cut service on several of our city’s routes.

However, Metro does have a program to allow cities to buy service. I contacted Metro and spoke with Michelle Allison, a self described “transit geek” working on the Community Mobility Contracts project, which allows cities to purchase Metro service. Community Mobility Contracts are a “full cost recovery” program, meaning that cities pay 100% of net costs to Metro. So if the route would cost $200,000 a year, that’s what it costs your city.  Also, even if your route happens to recover an above-average amount at the fare box, they charge you the system average. For example, if you collect $100 in fares on your route that costs $200, Metro only gives you credit for collecting $60.  For a low-performing line, this could be a benefit.  For a high-performing line, it would be a drawback.  My quick math (based on this article) is that a shuttle service like this might actually net higher than average cost recovery, so this makes Metro’s service look less desirable than it might otherwise look.

Next, I approached Hopelink, a social service provider on the Eastside. Many people don’t know that Hopelink provides all of the buses for Metro’s DART Bus service. They quickly returned messages, and came back with an estimate of $75/hr (almost 1/2 of what Metro’s average cost is). Even without any farebox recovery, that brings the cost to approximately $113,000 per year.

Finally, I spoke with the neighborhood association to see if there was interest in paying for this service.  Initial comments included concern about the cost and whether the City of Issaquah and service users would be paying for part of the costs. I’m working on scheduling a meeting with the President of my association to assess next steps.

I’m excited about my nascent effort to expand transit options in my neighborhood, and curious if my efforts will bear any fruit. I’m hopeful that this service upgrade could mean fewer car trips and perhaps allow some people to downgrade from 2 cars to 1.  The Issaquah Highlands is never going to be downtown Seattle, but perhaps some additional transit options can improve people’s lives. I hope to share my findings soon.

37 Replies to “How to expand transit service, one neighborhood at a time”