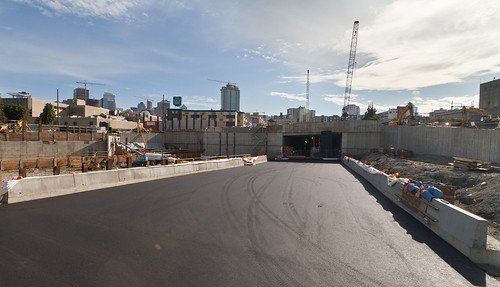 For far too long, “build now, pay later” has been the transportation budgeter’s mantra. In the 2000s, for example, Washington committed itself to massive road projects that it didn’t have the money to build. So the state floated bonds, assuming that revenue from gas taxes would show up to pay them off.

That hasn’t worked out so well. Traffic didn’t grow as expected, and gasoline and tolling revenue has gone AWOL as a result. Gradually, planners have come to realize that debt service will swallow up most of the state’s gas tax receipts, crowding out everything else. As the chart below shows, WSDOT predicts that within a few years three-quarters of the state’s gas tax receipts will pay for old projects.

There are plenty of sound reasons — from Marchetti’s Constant to congestion to gas price volatility to increasing environmental concerns — to assume that gas tax revenues might decline over time as people either drive less or more fuel efficiently.  Nonetheless, WSDOT has consistently projected gas tax revenue reaching for infinity.  For a few years now, Williams-Derry and Sightline have been hammering away at those overly-rosy WSDOT projections (and this one on USDOT projections is a classic).  Glad to see the agency take the note.

What’s interesting to me here is that it’s not the planners, but the bean counters who have finally seen the light.  The Office of Financial Management is stepping up and calling B.S.  It’s a refreshing acknowledgement that we simply won’t have the money to pay for all these road projects with current gas tax revenues.  In a sane world, that would mean fewer highway mega-projects.  After all, if people are driving less, you don’t need all those mega-projects anyway.  In an insane world, that might mean individual counties looking to get creative with new highway revenue sources while Olympia dithers.  I wouldn’t be surprised if, sadly, talk of a new RTID pops up sooner rather than later in an effort to squeeze more highway money out of a system that’s running out of it.