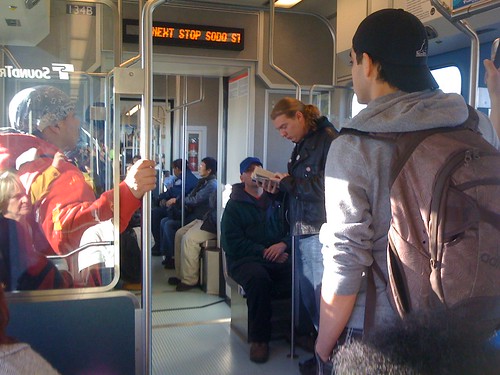 The Sound Transit Board of Directors rolled through a series of momentous decisions Thursday afternoon. The agenda and links to back-up materials are available here. Video link is here.

The Board followed the recommendation of Staff and the Board’s Operations and Administration Committee to create a low-income adult fare category, consisting of riders who qualify through King County Metro’s or Kitsap Transit’s low-income fare program (namely, individuals at or below 200% of the federal poverty level), but to offer a low-income fare only on Link Light Rail.

All fare changes will take effect in conjunction with Metro’s fare changes, on March 1, 2015.

Two other options reviewed by staff would have implemented low-income fares on ST Express just within counties, and on ST Express and Sounder throughout the ST service area. Other fare categories on the modes with a low-income fare would have been raised by 25 cents to offset the fiscal impact. Both options would have required making the low-income fare available to riders in Pierce and Snohomish County. They ran into opposition from suburban mayors on the ST Operations and Administration Committee, including Redmond Mayor John Marchione and Sumner Mayor Dave Enslow.

The Board authorized the CEO to sell a parcel of surplus property next to Othello Station to Mercy Housing Northwest 9 Othello East LP for $1,900,000, for mixed-use affordable housing transit-oriented development. Mercy Housing Northwest offered the better of two submissions in response to a Request for Proposals put out by ST in January.

Mercy Housing Northwest’s development, named the Myrtle Street Apartments, will have approximately 108 units of workforce housing ranging from 30% to 60% of area median income. 60% of all units are planned to be 2 bedrooms or larger. The development will provide 10 commercial parking stalls and 40 residential stalls for a residential parking ratio of 0.37. Mercy Housing Northwest applied for City of Seattle Housing Levy Funds in the fall of 2014 and plans to apply for Low Income Housing Tax Credits in January and February of 2015.

In related action, the Board authorized the CEO to execute an agreement of cooperation with the City of Seattle, MHNW 9 Othello East LP and Mercy Housing Northwest, to share information about the Myrtle Street Apartments and create a process for corrective action if the developer defaults under its loan obligations to the City or if the project falls behind schedule.

Part of the meeting materials was a list of amendments to the Long Range Plan being offered by board members.

· authorized the CEO to open up a new trust fund account for employee health care benefits.
· approved the 2015 State Legislative Program, including seeking authorization for ST3 funding.
· authorized the CEO to extend the 5-year ST Express service agreements for 6 months with King County Metro and Pierce Transit while negotiations on long-term contracts continue. Both service agreements expire at the end of 2014.
· authorized another $12 million for Link construction contracts.
· authorized issuance of up to $1.33 billion in bonds in order to access a federal loan at 3.1% interest in support of East Link.