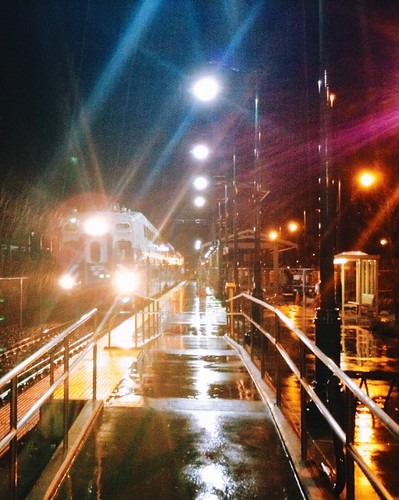 My iPod Touch snap postprocessed to emulate Kodachrome, “Sounder North in the Rain in “Kodachrome”

Below is the body of my comments to the Sound Transit Board & King County Executive Dow Constantine, cc’ing the main Sound Transit e-mail addy & Mukilteo Mayor Jennifer Gregerson regarding the ongoing Sounder North slide situation.  Figured I’d post here as an editorial.

I am the statistical outlier who has been boarding Sounder North at Mukilteo Station to get to Everett Station in recent months.  I am relieved that King County Executive Dow Constantine promised in the Seattle Times that he would raise at the monthly Sound Transit Board meeting a better Sounder North safety policy.

I’m not so sure I’d get to comment on the matter orally so sending this e-mail of support for a Sounder North safety policy of… shutting Sounder North down if there has been serious rainfall in the previous 12 hours before a run.  I’m asking you do what your Interim CEO Mike Harbour wants which is, according to The Seattle Times, “if the weather and monitoring devices indicate a high risk” to send a blast e-mail as you do so helpfully :-) & put signs up at the stations of Sounder North cancellation.

I’m also going to ask that you please require ALL Sound Transit employees on Sounder North undergo lifeguard training as soon as possible – just Sounder North.  This is so in the event a Sounder North ends up in Puget Sound somebody can help pull folks back to shore until First Responders can arrive because when seconds count, First Responders are minutes away.

On a personal level, I don’t want to have to tell my Sedro-Woolley mother at 1900 Hours/7 PM from my cellular that somehow her son’s on a train and I knew the train was becoming unreliable if not unsafe until May but I took Sounder North anyway knowing I’d either be stuck behind a slide or taking some of Puget Sound home with me.  As such, I will be going back to Everett from the Future of Flight – where I do professional aviation photography and help the organization out via Everett Transit Route 70 at 84TH ST SW & 44TH AVE W, then Everett Transit Route 18 from the Mukilteo Ferry Terminal to make my Everett Station connection to Skagit Transit 90X and home.  My point is this: I really like the reliability, comfort and WiFi of Sounder North.  However I’m not exactly too gung ho about riding the rails against unstable slopes for WiFi.

Perhaps, if I may submit some business advice, it would be best to stand Sounder North down until slopes are reinforced or until May.  Or perhaps as one internet commenter on the Seattle Times story thought up:

There is another route for the Sounder, abit more expensive, and that is up the old North Interurban. It is a much better route in that it accommodates a much higher population density. But, because past politicians allowed it to be fragmented, reacquiring the land by Lake Ballenger and north of Alderwood Mall will be expensive. But it also gives a direct passenger rail access to Shoreline and Lynnwood…

Just something to consider, although I’m pretty confident my contact Mukilteo Mayor Jennifer Gregerson would have an acutely different opinion.

Ultimately, I’m asking the Sound Transit Board to please prioritize rider safety over ridership statistics.  If that means a new express bus service to these four communities – I’m okay with that grudgingly.  If that means making Sounder North seasonal away from the wet season until safety measures are installed, okay.  But please put safety first and fiscal responsibility a close second – normally the two don’t contradict.

I got a thoughtful response from EmailTheBoard-AT-soundtransit-DOT-org pledging:

Thank you for your message to the Sound Transit Board. Your email is being distributed to all boardmembers for review, and will be responded to within three business days.

If true, and I have no reason to believe otherwise, I much appreciate.

If you’ve got thoughts about Sounder North, you just might want to send EmailTheBoard-AT-soundtransit-DOT-org your thoughts.  Here’s why:

5 Replies to “North by Northwest View 06 – Comment Letter to Sound Transit Board, RE: Sounder North”