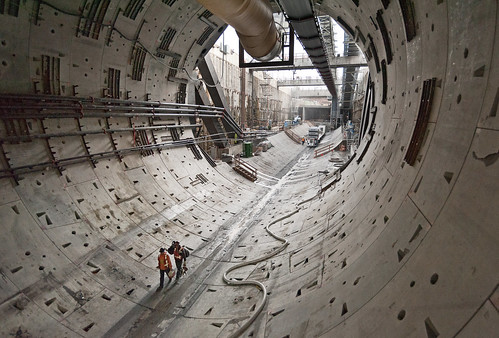 The stream of news from the deep-bore tunnel project has been uniformly bad: stuck for months for an unclear reason, the completion date has slipped to August 2017 at best ($). The rescue effort itself is causing the already brittle viaduct to sink, along with a chunk of Pioneer Square. It’s unclear, at least to me, who will end up paying the ballooning costs, but there certainly will be lots of litigation ahead.  Nothing catastrophic has happened – yet.

Back in 2009, I joined many others in thinking that the deep-bore tunnel project was a bad project at any price, and now that it is sure to take longer and more likely to cost taxpayers more than budgeted, that judgment looks better than ever. We believed Seattle could do just fine without another highway through downtown, particularly with alternative transit investments, and thought closing the viaduct would illustrate that for everyone. I continue to believe that.

In my circles, the new developments spawn some justified gloating, and renewed calls to both close the viaduct now and halt the project. Indeed, halting the project would be a fabulous decision for all the reasons linked to above. However, were I convinced that the project was critical to the city’s future, I wouldn’t let a few overruns or delays change my mind, just as I didn’t when Sound Transit ran into somewhat similar problems early in its first critical project. And much to my dismay, as it turns out we haven’t seen any of the defections that would indicate this project is really in political trouble.

As for closing the viaduct, everyone agrees that it isn’t safe in the event of an earthquake. For many people, that’s enough to shut the thing down, as even Gov. Gregoire threatened to do by 2012, and that’s an entirely reasonable viewpoint. But for many others, earthquake risk is worth avoiding whatever economic damage closing the viaduct would cause. Now that the viaduct is settling, WSDOT insists it is still as safe as it was.  WSDOT Secretary Lynn Peterson writes ($) that if it weren’t, they would simply apply stopgap techniques to shore it up. To claim that the measured settling demands closure of the viaduct implies at least one of two things: WSDOT’s engineers are incompetent, or managers are willfully ignoring technical advice for political or reputational reasons.

I have no special insight into what goes on at WSDOT, and for all I know a huge scandal revealing one or both of the above could surface tomorrow*. But functioning in a technical society requires placing at least a little trust in the judgment of trained professionals, and I think we have to give them the benefit of the doubt on this narrow matter.

* or – God forbid – a catastrophe proving their incompetence.

80 Replies to “The Tunnel is Still Terrible, but Nothing Has Changed”