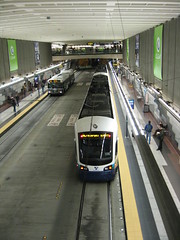 At December’s Sound Transit Board Meeting*, Mayor Murray offered an interesting amendment to the “building blocks” section of the long range plan (79:30):

T18. In addition, as part of implementing a regional transit system, Sound Transit can explore policy and funding alternatives to address significant regional facilities, such as tunneling for future core system capacity through downtown Seattle; operations, maintenance and storage facilities; and transit vehicles.

The introduction began a bizarre sequence where Mr. Murray immediately left for another event, leaving Mike O’Brien to defend the measure; a series of board members stating that a second tunnel was an ST 4 or 5 discussion and therefore premature; and it finally going to defeat 6-8 (O’Brien, Constantine, Balducci, Phillips, Peterson, and Strickland voted yes).

This would have been the first (small) step to suspending subarea equity when funding a second downtown tunnel. This train of thought goes way back to the Mayoral campaign, where candidate Murray critiqued Mayor McGinn’s potentially city-only rail plans by saying that Seattle couldn’t afford light rail alone, and that tweaking subarea equity was the only way to build it. And in fact, if you define the minimum Seattle light rail increment as serving Ballard and West Seattle, that may be an accurate statement given the agreed revenue limits of the next package.**

In the debate, it seemed as if the groups were talking past each other. In ST3, any new tunnel would exclusively serve Seattle neighborhoods, although new suburban lines could use it in a later package. However, the new tunnel is needed because DSTT capacity, originally paid for by King County, will be filled with trains from rather far-flung places. And that begins a spiral of arguments that quickly makes you realize that every project benefits every other subarea in some way, as this is an economically integrated region. Thinking somewhat more practically, each subarea has some core objectives for ST3, and it doesn’t seem likely that the allotted funding will allow each subarea to meet those objectives and fund major “regional” projects.

Although the Mayor’s office declined an opportunity to discuss this chain of events with me, I chatted about it with Mike O’Brien last week. He said he was “encouraged” that the Mayor wanted to bring it up, and “just because it’s not in [the long range plan] doesn’t mean we’re not going to talk about it” when the ST3 package comes together.

He went on to sketch out the core objectives for Seattle, as he sees them, in the ST3 process:

My focus is something that connects Ballard and West Seattle in some way. I’m concerned about what happens if we have to pick either West Seattle or Ballard. It may be divisive with Seattle voters and politicians…

My understanding of the long term system design is that if we have light rail coming direct from Ballard to downtown and to West Seattle, we just can’t put those trains in the existing tunnel. If in ST3 we’re going to spend a big chunk of Seattle’s resources building a second tunnel so that we have the capacity 20 years from now to manage the trains, vs. somehow getting something on the ground connecting Ballard and West Seattle and figure out the tunnel later, I’m looking for opportunities to do the latter.

If we had a stub line that came from West Seattle to Stadium or Sodo, and you had to transfer to get on the other train, that’s obviously not the long-term vision I want. But if that’s what we do for now, to at least have reliable connectivity, and we’ll figure out in the future how to get a direct connection, that’s something (without a lot of technical analysis on my part) that would be in my vision on how we’d do it.

Similarly, I don’t know what a Ballard connection looks like, but a Ballard to UW line with a transfer at Brooklyn is something that has a slightly lower price tag.

Given the enormous stresses on the Snohomish, Pierce, and South King subarea budgets with respect to their core political objectives, I’m very skeptical that there is an achievable deal where they chip in towards very cost-effective projects in Seattle, even if the alternative instead dumps those riders onto an overloaded*** regional spine at U District and Sodo. Mayor Murray is obviously more optimistic — and I’m not inclined to criticize an official for advocating a correct but possibly doomed policy.

*Over a month ago. Better late than never!

**This gambit also sheds light on the otherwise perplexing Mayor Murray assertion that Bertha failure would weaken the case for a second tunnel. Without this subarea equity conversation, the marginal votes for ST3 (in the legislature, on the board, and in the electorate) will focus on suburban projects, not how Seattle spends its money. But Bertha’s troubles provide cynical partners a rhetorical reason to doubt the wisdom of regional projects beneath downtown.

*** Possibly! Predictions about the future are hard, and ridership will depend on a thousand things totally outside Sound Transit’s control.