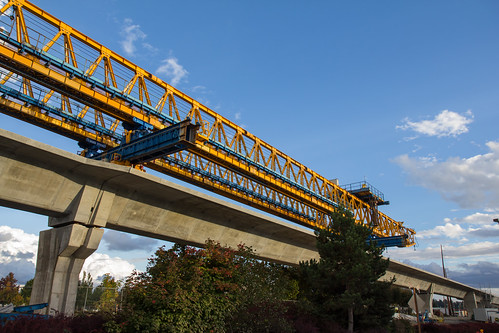 [UPDATE 2 4/3/2015: Please see this February post that clears up the confusion about $15 billion packages. The $15 billion in the title here does not mean what you think it means.]

[UPDATE: Chris Karnes points out that small starts grants are capped at $250m in total project size, so Tacoma Link extension is ineligible.]

This month’s board deliberations revealed that Sound Transit’s request to the legislature for more tax revenue would enable an ST3 capital program unlikely to exceed $15 billion in year of expenditure (YOE) dollars, not conincidentally about the size of ST2. What might a package of that size buy for the region?

As this exercise involves a lot of guesswork, and is largely designed to illustrate scale and plausibility, I’ll lay out all the underlying assumptions for ease of ridicule at the end of this post. In reality, updated revenue projections, inflation rates, state and federal grants, and the actual sequencing of projects will have a huge impact on what’s actually possible, well beyond what I’m able to compute as an amateur outsider.

All of the long range plan studies are priced in 2014 dollars. I couldn’t get detailed revenue projections from ST, so using simplifying assumptions I’ve translated $15 billion in YOE dollars into $10 billion in 2014 dollars. In addition, ST spokesman Geoff Patrick estimates that existing uncommitted tax authority amounts to about $300m in both Snohomish and Pierce, and $100m for the others.

To be clear, these projects are my guess as to what the board will do given the funds available, not my personal dream sheet in each subarea.

Snohomish County: The bad news is that $1.6 billion is the low-end cost estimate for the relatively cheap I-5 Light Rail option to Everett, with no extension to Everett Community College. Enthusiasts seeking the higher ridership potential of SR99, or County leaders eager to serve job centers at Paine Field, would have to either abandon those dreams, find state or federal grants, or accept something less than getting all the way to Everett in this round. Even advocates for an I-5 alignment would evidently have to accept some project risk or significant quality reductions on the line. Then again, the ability to stamp “Boeing” on something may be the magic trick to get direct transit funding out of Olympia. Mr. Patrick noted that these limitations “have been flagged in the board room.”

South King:  In practice, fulfilling the commitment to get to Federal Way along SR-99 has to be the first priority. The SR-99 alignment will probably cost $1.8 billion, so it’s about the right size.

Pierce County: One wrinkle in subarea equity is that a subarea may spend money outside its the boundary if it clearly benefits that subarea. It would be hard to argue that Federal Way to Tacoma is a priority for South King County, so Pierce should fund the $1.9 billion to run Link along I-5 to Tacoma. Given the limited development demand and sketchy long-term future of the land near the port, forsaking development along SR-99 may be worth the savings. The remaining $200m or so could cover some of the $600m cost of Tacoma Link expansion to TCC.

For the remaining $1.8 billion, the real answer is to go back to the drawing board. This subarea is where the long-range plan study alternatives were all atrocious, mostly because it constrained the relatively cash-rich Eastside to routing along the cheap but poorly sited Eastside Rail Corridor, or a hugely problematic 520 and ship canal crossing.

For the sake of completeness, I’ll suggest two options that would fit in the available budget space, although both have significant drawbacks.

First, modify the studied $2.7 billion line from Totem Lake to Issaquah along the Eastside Rail Corridor, Richards Rd., and I-90. I would focus on the core from Downtown Kirkland to Eastgate, which cuts the length in half. The ~$1 billion+ in savings would pay to tunnel into the important centers in Downtown Kirkland and Downtown Bellevue instead of skirting them, ideally along Downtown Bellevue’s East/West axis. The hope is that these routing improvements would improve the anemic ridership projections of this proposal.

The second option is build the massive I-405 BRT network ($1.7 billion) and use any remaining funds for the $500m UW-Kirkland BRT line. Technically, this project is entirely worthwhile. However, I’m not sure that will be enough to overcome natural voter skepticism of BRT, and resistance to the idea that cities like Kirkland should settle for second-best.

In any case, revisiting the Kirkland/Bellevue/Eastgate rail options and an initial study of the Sand Point crossing would be a worthwhile activity in 2015.

North King: North King is the hardest to predict because there are several interesting projects at different price points. Meanwhile, Seattle projects are most likely to excel under FTA formulas and gain hundreds of millions in federal grants.

There are many ways to mix and match the components. If my revenue estimates are a little high, then a Ballard/UW tunnel ($1.7 billion), preferably with additional funds for at least one more station is the only thing Seattle can accomplish. It’s the cheapest way to connect what should be one of the highest-priority neighborhoods in the region, Ballard.

At the $3 billion+ level, where I’m guessing North King will fall, it’s possible to instead build Ballard/Downtown option B (elevated via Interbay, $2.8 billion) and extend the tunnel through downtown. At the cost of missing Fremont and Wallingford, this serves Belltown, Lower Queen Anne, and the regional destination that is Seattle Center, in addition to some less-dense neighborhoods. Moreover, this alignment is a clear down payment on extending Link to West Seattle in the next round by constructing the necessary downtown tunnel.

At the $4 billion+ level, there’s enough money to instead build the superior Ballard/Downtown option D ($3.5 billion) plus the downtown tunnel. This alignment swaps Queen Anne Hill and Fremont for Interbay, which is a clear upgrade.

At the less plausible $5 billion+ level, ST could build both Ballard/UW and from the West Seattle Junction to Downtown ($3-3.5 billion?), covering all of the city’s quadrants. Any additional money would be best deployed to tunnel further up into Belltown and Seattle Center.

Once again, the revenue estimates above are hugely dependent on a series of educated guesses I made. As it happens, South King and Pierce are in the ballpark for completing the spine to Tacoma, the primary focus of their representatives in this process. East King seems perfectly sized to finish East Link to Redmond and run BRT on I-405. Snohomish is coming up a bit short of Everett, even setting aside the goal of Paine Field. North King is the hardest to read, because there are several projects with different price tags and different merits; what happens there will depend on what the final budget estimates are.