Rail passengers began traveling between Seattle and Tacoma in 1884, a 25 mile trip that took three hours.   Eventually, the interurban made trips between Tacoma, Seattle and Everett until 1928, when Highway 99 opened and intercity rail travel began a long decline.  Sound Transit brought a commuter rail connection back to the City of Destiny with Sounder in 2000, and it’s long been the agency’s goal to connect the regional “spine” between Everett, Seattle, and Tacoma with frequent, all-day transit.

One can certainly debate whether a 60-mile N-S light rail line is the right vision for regional transit (one that transitions from highway-running to at-grade streetcar to urban subway along the way). If I ran the zoo, I’d probably spend my money building expensive rail connecting close-in urban areas instead.  Alas, due to the outright hostility to transit at the state level, we’ve opted to roll our own “regional” transit solution. And so, as we evaluate high-capacity corridors for possible funding in future Sound Transit capital expenditures, connecting Tacoma is almost a given at this point.

The original ST2 package included not just a corridor study for the Tacoma extension, but a full environmental review.  When the recession hit and the South King subarea’s sales tax revenue declined, the board shifted gears and instead opted for a shovel-ready plan to Federal Way, which could be used to start construction, along with a lighter corridor study from Federal Way to Tacoma.

So what does an extension to Tacoma look like? Unlike the South King study, the 10-mile stretch from Federal Way to Tacoma is fairly straightforward. We can choose either SR-99 or I-5, and we can have light rail or bus rapid transit.  Thus we see Sound Transit’s relatively straightforward options in the chart below: 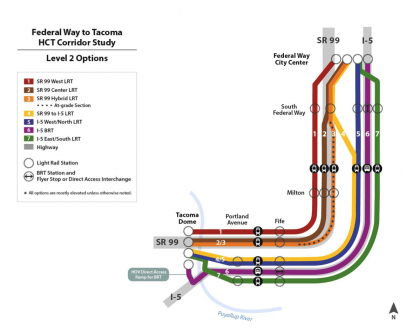 At the low end, we have BRT along I-5, costing $600M-$700M, and carrying 6,000 to 11,000 passengers.  Reliability would be fairly poor due to I-5 traffic, and the transfer penalty would be significant.  The cheapest LRT option runs along I-5 and costs between $1.7B and $1.9B. The most expensive option runs along the SR-99 median and costs between $2.5B and $2.9B.   Running the train along the west side of SR-99 drops the price to $1.9B – $2.2B, with no cost to ridership or time penalty.  Median-running makes life easier for pedestrians (no one has to walk across the entirety of SR-99 to catch the train) but may or may not be worth the almost 50% increase in costs.

That said, Sound Transit isn’t making this decision in in a vacuum.  In an alternative universe, it might make sense to build the cheaper option and use the savings elsewhere in the region. But due to subarea equity, Sound Transit may find itself with excess cash in this subarea that it can’t spend elsewhere, and so it’s good to have a superior option on the table.

Full report after the jump.

60 Replies to “Completing the Spine: Federal Way to Tacoma”