The Nickels-era “Bridging the Gap” property tax package has been building and maintaining transportation infrastructure for the last nine years, but expires in 2015. Informed by the “Move Seattle” strategy for transportation investment, Mayor Murray today unveiled a November 2015 ballot measure of the same name to replace and expand on it.

Bridging the Gap raised $365m over 9 years; the actual property tax rate fluctuated, but last year it was 36 cents per $1,000 of assessed value. Move Seattle will initially levy 61 cents per $1,000, raising $900m over the same period thanks to higher property values and more residents – a “growth dividend.” The 70% household cost increase enables 150% more funding.

Using the numbers from last year’s report on the subject, I believe this would leave about 11 cents of capacity below the city’s reserve limit. SDOT says the annual cost to the median household would be $275, an increase of about $113. This money would unlock state and federal grants to enable billions of dollars of maintenance, transit, bicycle, freight, and pedestrian spending.

SDOT breaks out the $900m proceeds into four buckets. One emphasis of Move Seattle is an integrated plan that considers all modes and purposes holistically, so the categories are bit fuzzy. Nevertheless:

Below are three SDOT slides that compare the scope of BtG and Move Seattle. But first, a Correction. In the March 3rd report I said that the Projects A through X were ranked in order of score according to the priority system SDOT established. My SDOT source now says he was misinformed; the projects are in no particular order save that the higher-scoring ones (A through Q) are fast-tracked for funding. 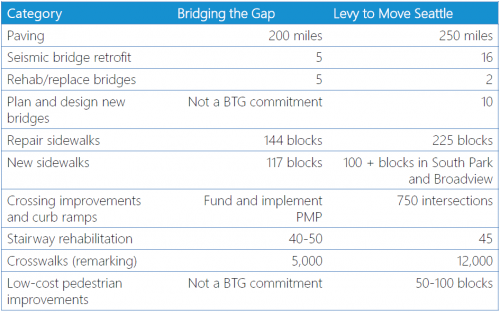 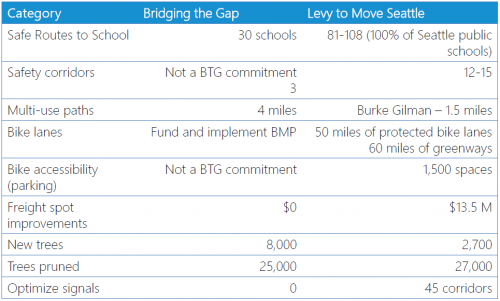