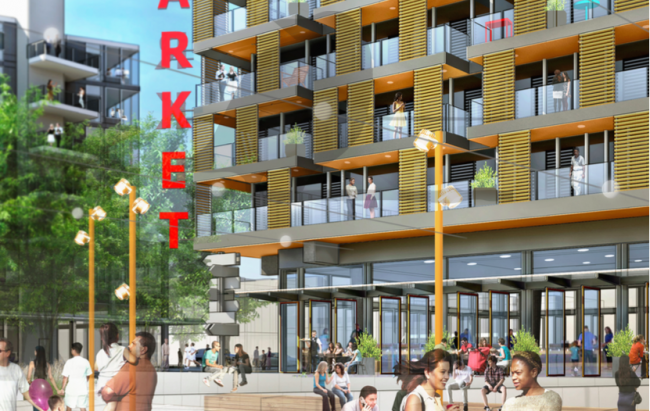 Last week it was announced that Sound Transit has selected a developer to build atop the Capitol Hill light rail station. Since so many of our other light rail stations are sadly hemmed in by highways, constrained by density-opposing locals, or located next to giant sporting arenas, everyone seems to have pinned their hopes on Capitol Hill to deliver some actual transit-oriented development.

With all that scrutiny came intense pressure to build affordable housing, family-sized housing, a community center, a farmer’s market, and other amenities. The site became a vessel for every neighborhood group’s dreams. One developer decided it was too constraining and abandoned their bid.

While the selected proposal looks nice, it’s actually quite short for being next to a rail station. In Vancouver, 25 stories seems to be typical for development around SkyTrain stations, even outside of downtown.

But you don’t have to look all the way to Vancouver to see 20+ story residential buildings. In fact, just half a mile from Capitol Hill Station there are several tall residential towers going up.  Developers seem to have realized that, despite being worlds apart culturally, sleepy First Hill and buzzy Capitol Hill are, geographically speaking, actually kinda the same place. For example, 24-story 1321 Seneca will be just two blocks from Pike/Pine.

All of which leads to a funny/sad situation, in which the tall buildings are not where the station is.  First Hill has been zoned for high-rises for a long time, while Capitol Hill has not.  And so we end up with a lopsided neighborhood.

Of course, First hill was initially slated for a light rail station. And yes, the First Hill Streetcar (opening soon!) is supposed to ameliorate some of the disconnect.  Still, it would be ideal to have the most intense land use adjacent to light rail.

76 Replies to “When it Comes to Zoning, the Status Quo Tends to Win”