This week, I’ve sketched out an Eastside package Sound Transit should consider for ST3 funding. A key element of that is the BRISK network that would connect the Eastside with fast, frequent and reliable HCT service. Today, I’d like to discuss what it might cost and what needs to happen to make it a reality.

Assuming a $15 billion dollar ST3 package and subarea equity, all of the lines described can be built. The complete portfolio of capital improvements described may, depending on the accuracy of the cost estimates, is roughly in line with the projected east subarea revenue. The cost estimates are based on Sound Transit’s corridor studies, augmented with guesstimates for additional capital investments not in their corridor studies. Those estimates are derived from actual costs from comparable projects elsewhere in the region, but some of those estimates are necessarily speculative.

No funding from the cities, WSDOT, or the Federal Transit Administration is assumed. 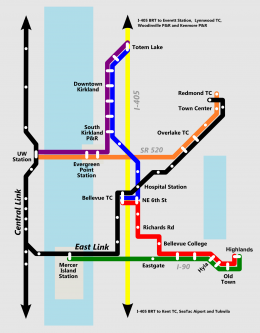 However, Congress has shown interest in supporting high-quality BRT services as part of ongoing Federal Transportation Bill discussions, so it’s possible future funding may be available.

While the projects are somewhat differently arranged, all of the corridors proposed have analogues within combinations of corridors studied by Sound Transit in 2014 (plus the East Link extension). BRISK matches Sound Transit’s Long Range Plan with HCT or BRT as an identified service for all of these corridors.

Their mid-point capital costs from Sound Transit’s corridor studies are:

By Sound Transit’s numbers, that would mean a total capital investment of $3,230M. Arguably $200M or more of I-405 BRT costs should be assigned to Snohomish County, commensurate with ridership. The remaining $3,030M would fit very comfortably within a fully funded ST3 package. However, network I’ve described is more robust than the corridor studies assume. Major additional elements include direct access ramps and inline stations to improve access and travel times. These add incremental capital costs could add roughly $820M, for a total of $3,850M. That’s slightly over one-fourth of ST3 projected revenues, so just on the edge of what’s possible.

On the other hand, the least expensive rail line from Totem Lake to Issaquah, with all of the compromises inherent in the studied alignment, would cost $2,300M. That’s as much as all of the non-EastLink BRT project estimates from ST combined, with much lower ridership, and would leave many places on the Eastside unserved. The more robust version of that line described in “A Better Eastside Rail” would deliver better outcomes in several places, but at considerably higher cost.

This proposal deserves thorough study. Sound Transit, and local agencies, should focus their attention on building out a network of transit investments across the Eastside. This package of investments would provide a wider set of local and regional connections for transit riders than other ideas considered thus far. This can be reinforced by careful integration with Metro. With stepped-up Sound Transit investments in core routes, Metro can reinvest operational savings into next-priority routes.

22 Replies to “Making “BRISK” a Reality”