Per Rochelle Ogershok at King County, the ORCA Joint Board is considering adjusting the regular and youth card fees ($5), with a decision expected in the next two months. The Regional Reduced Fare Permit card fee ($3) is set by an interlocal agreement among all the members of the ORCA pod, plus a few more agencies outside the pod, so that fee is not being looked at. 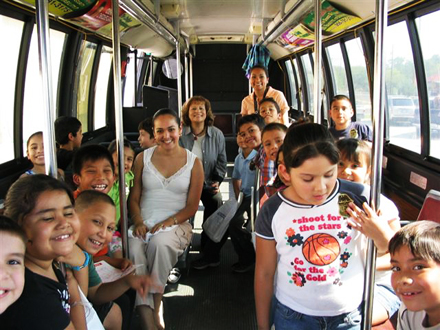 It should come as a shock to nobody that children disproportionately live in poverty. Indeed, the annual count done by Kids Count Data Center has the portion of children under 18 in Washington living below 200% of the federal poverty level hovering closely around 40%. That number contrasts with 28% of the state’s adult population qualifying as below 200% of the federal poverty level.

The ORCA Lift program’s eligibility threshold is 200% of the federal poverty level. However, the card is for adults. The fare structure, on the services that accept the LIFT ORCA, has the LIFT fare identical to the youth fare, at least when using ORCA.

One difference is the card fee. King County opted to not have a fee for the LIFT ORCA. The $5 youth card fee remains in place.

Many public school students get a free card, and loaded passes, through their school district. In those cases, the school district is assumedly eating the card cost.

Nearly every transit service in the ORCA pod allows riders 6-18 to pay the youth fare just by paying that amount of cash. The King County Water Taxis are the exception. So, there is little incentive to get the card, unless it is being offered for free through one’s school.

The agencies want to partially recuperate the administrative costs of card production and distribution. Of course, the agencies will probably save more in bus travel time speed-ups by simply offering the card for free. The main differences between the regular and youth administrative calculations is that youth card distribution is a little more expensive, and the transit agencies would end up charging the school districts less. (This would not necessarily be a bad result, if we want school district money to be spent first and foremost on education.) Also, there is little reason to believe youth cardholders would treat the card as disposable or swiftly replaceable.
.

The ORCA Joint Board may look to the $3 RRFP card fee (which is actually a “permit fee”, with the card technically being free) as a philosophical reason for keeping the regular card fee at least $3. However, there is nothing in law requiring that the RRFP permit or card fee be no higher than the regular card fee. Again, it comes down to gambling lots of service hours that people will readily pay $3 for the card rather than continue just paying with cash, years of evidence (See page 13.) to the contrary. And it would still leave ORCA as easily the most expensive bus smart card in the USA if one doesn’t count Utah Transit Authority’s Fare Pay, which exists only because not every rider has contactless debit/credit cards, which are readily accepted on UTA services.

Nor does the RRFP interlocal agreement pre-empt having $3 of e-purse pre-loaded on each new RRFP ORCA card.

13 Replies to “The Other Low-Income ORCA Card Fee”