There seems to be wide agreement that enhanced bus service on Madison Street between the waterfront and at least 23rd Avenue would be a great asset for the city.

The debate here on STB seems to be whether to move forward with dedicated, center-running lanes and median platforms, or bus/right-turn only lanes on the outsides of Madison with platforms constructed on current sidewalks. This center vs side debate exists in part because, though center-running lanes provide protection from right turns (leading to improved travel times and reliability) and afford greater visibility, the current center-running configuration seems to necessitate buses with left-side doors, precluding open BRT as the rest of the Metro fleet does not have doors on both sides. So the center-running vs side-running discussion has really become a discussion about closed vs open BRT.

As it turns out, no operational compromise is necessary to achieve open and center-running BRT on Madison. Below I explore two options (one of which SDOT seems to be considering but doesn’t get much attention) that are compatible with the center-running and open BRT concept.

What if we could have all the benefits of center-running bus lanes and joint median platforms while allowing multiple routes to make use of different segments of the Madison BRT infrastructure?

One way this is possible is to have contra-flow, center-running bus lanes that allow buses with right side doors to drop off and pick up passengers at a median platforms. With this arrangement, there is no need to purchase buses with left side doors or exclude other buses that might travel down Madison—like a Broadway to Madison route 49—from using the infrastructure. Center-running contraflow lanes would allow us to retain future operational flexibility while still building what is necessary for a premium BRT the length of Madison. 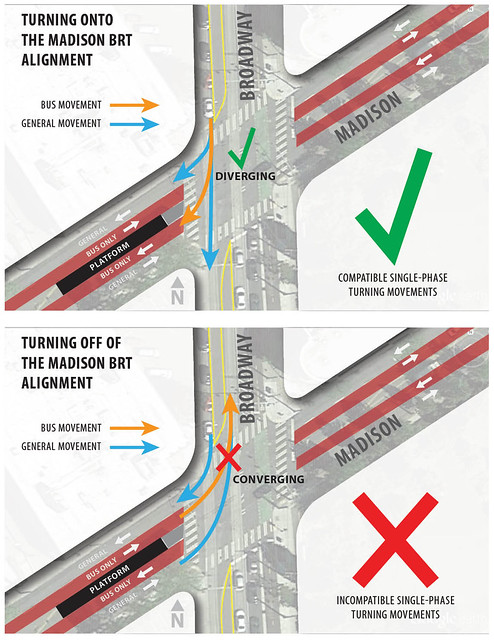 The first concern can largely be handled with clever signal timing and transit priority; using the Broadway/Madison example visualized above, turns onto Madison would require no special signal treatments, while turns from Madison would require separate turn phases for buses and general traffic.

The pedestrian crossing concern can be addressed with bulb-outs, pedestrian-activated crossing beacons, and median pedestrian refuges, where possible—all measures in support of the project’s commitment to “enhance walking conditions”.

In the instance of a disabled bus in the BRT right of way, in-service coaches could pull around the immobile bus using the opposing transit-only lane.

SDOT says they eliminated this option early in the process because the added signal complexity lengthened the light cycle and negated much of the time advantage.

Another way to achieve center-running open BRT is by splitting the stop into a pair of far-side platforms, a concept SDOT created graphics for. Yet looking at SDOT’s simplified options (center or side?), it’s not immediately clear this one is on the table. 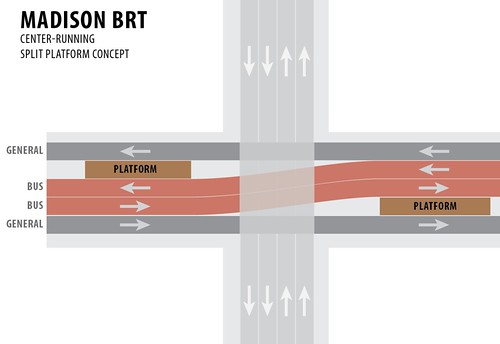 You maintain a similar footprint as median platforms, reap the level of service benefits of center-running buses while avoiding some of the confusion of contraflow lanes.

A couple of challenges:

SDOT says this option is still alive, but they are not keen on it for reasons that are unclear.

The center-running-and-closed BRT vs side-running-and-open BRT dichotomy is a false one. There are certainly tradeoffs between the different arrangements. But in the case of Madison BRT, we don’t have to compromise on reliability or flexibility. Center-running contraflow lanes or a split platform arrangement would allow buses to enjoy the quicker and more reliable travel times that come with center lanes free of turning vehicles while enabling any bus route to access the infrastructure.

The discussion of concepts for Madison BRT could use a bit more nuance. Let’s hope SDOT recognizes this false tradeoff—that center-running must mean closed BRT—and continues to pursue and promote operationally flexible concepts.