SDOT has started work on its second HCT corridor, “Roosevelt to Downtown”. It’s one of three HCT corridors in Seattle’s Transit Master Plan (TMP) adopted in 2012. The other two HCT corridors are Madison BRT, which is in design, and Ballard to Downtown, which was part of a joint light rail/streetcar study done by Sound Transit. The TMP also has fifteen Priority Bus Corridors, of which 23rd Avenue is about to start construction. The goal of the current Roosevelt study is to identify a “locally preferred alternative” mode and route by November. This summer SDOT will choose two alternatives and analyze them in detail.

SDOT held open houses last week to present their initial work and ask for comments. The initial alternative has a downtown rectangle (5th and Boren Avenues, Stewart and Virginia Streets), then goes north on Fairview Avenue N, Eastlake Avenue E, Roosevelt -11th-12th, NE 80th Street, and 5th Avenue NE to the Northgate transit center. Readers will recognize this as route 70 south of the Ship Canal and route 66 north of it. A “South Alternative” follows the SLU Streetcar’s routing from Valley Street on south. Most of the work done so far focuses on the corridor’s existing conditions and expected growth; i.e., the context for the line.

SDOT is heavily leaning toward BRT rather than rapid streetcar for this corridor; they said most of their results are pointing in that direction. One of the posters showed a chart of the unique advantages of BRT vs streetcars: BRT came out ahead in 8 of 11 metrics. 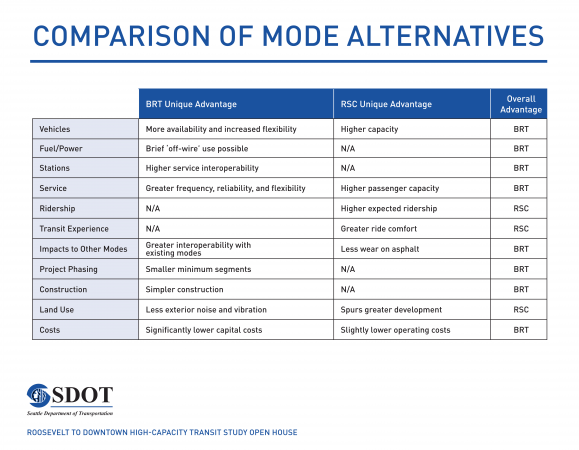 I have two reactions to the study. I’m glad the line goes all the way to Northgate, and I’m glad there’s no streetcar bias. I was afraid we were going to have to pry SDOT away from overuse of streetcars, but it seems to be happening naturally. Streetcars are a kind of anti-Goldilocks: more expensive than buses but slower than light rail. Seattle has so many transit needs that we need to focus on light rail in a few corridors and frequent buses in many corridors, not the streetcar middle ground which won’t be enough corridors and isn’t fast enough. So maybe in the Ballard-downtown corridor the city could also consider a “Route 40 BRT” rather than a streetcar.

The best thing about this Roosevelt line is it will serve as Link’s local shadow between downtown and Northgate, with transfers at Westlake, U-District, Roosevelt, and Northgate Stations. It doesn’t shadow Capitol Hill or Husky Stadium but it serves trips that don’t involve those areas. The transfer distance is two blocks at Westlake, three blocks at U-District, and direct at Roosevelt and Northgate. I was initially concerned about the three blocks at U-District, but I don’t see it as a dealbreaker. For many people on the Roosevelt line, the U-District is their destination so they won’t be transferring. Those going longer distances can transfer at Roosevelt Station just as easily. However, I urge the city to include a pleasant pedestrian path on 43rd Street between Roosevelt Way and Brooklyn Avenue as part of the project, to make the transfer as good as possible.

My biggest concern is that the city appears to be taking its TMP corridors as gospel and building them in isolation, without reconciling them to Metro’s goals. This leads to contradictions. Madison-BRT may replace an arguably more valuable Madison-Pine service (route 11). Metro is moving buses off Roosevelt Way in the U-District while Roosevelt HCT is doubling down on Roosevelt Way. None of the streetcar segments — SLU, First Hill, City Center Connector, Broadway Extension — address major transit needs, and they’re too short to replace any bus routes. Madison-BRT and the Broadway streetcar extension appear at odds with Metro’s 49 suggestion (Madison-Broadway). The net result is imposing routes and costs on Metro, thus diverting resources from whatever improvements Metro might have made instead.

I would like to see SDOT reconcile its corridors with Metro’s goals before solidifying any more lines, as I see Metro as being generally more correct in the current round of ideas. But what we ultimately need is a joint plan of both trunk routes and minor routes that both SDOT and Metro think is the best, rather than two different plans being pursued simultaneously and imposing things on each other. That said, the Roosevelt corridor is the one most compatible with Metro’s. It addresses proven demand on Roosevelt and Eastlake, and answers the question of what will shadow Link and serve the in-between stops.

You can comment on the Roosevelt HCT project at www.roosevelthctfeedback.org. There’s no clear deadline but I would fill it out soon. SDOT’s current focus seems to be on high-level issues and what to study, rather than the exact routing and stations which will come later, so you may want to think on those issues in your comments.

130 Replies to “Roosevelt HCT is Underway”