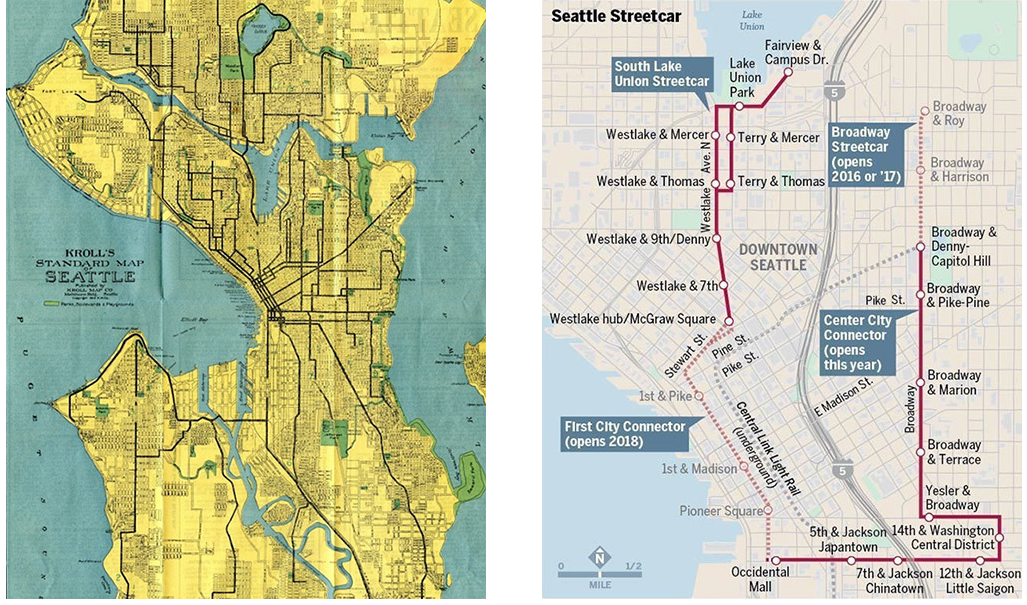 City council candidate John Roderick, one of two leading contenders to take on council member Tim Burgess in citywide Position 8 in the November general election (the other is tenants advocate Jon Grant), recently unveiled the centerpiece of his transportation plan.

No, not funiculars or gondolas or any of the other far-fetched (supporters would say far-sighted) ideas you’ll hear him expound about at forums. What Roderick, along with Alon Bassok, a less-viable candidate in the other citywide position, is proposing is something he calls “neighborhood rail.” The idea is to build a system of short-line rail connections between neighborhoods in the north, south, and west sectors of Seattle that operate largely independent of each other, using existing bus and rail lines to connect people over water crossings. The streetcars would not cross the ship canal, saving enough money in bridge and tunnel construction to bring the price down, in Roderick and Bassock’s estimation, to $1 billion for 75 to 100 miles of streetcar rail. After the system is built, ongoing maintenance would be funded by an employee hours tax, known derisively as a head tax.

The idea would be to supplement regional systems like Sound Transit with a city-only rail system that serves “people who live and work in our great city,” according to the text of the proposal—emphasis on and. “This would be a transit network for people who live in the city,” Roderick says, and it would be paid for entirely by city dwellers. The idea is similar in principle to former mayor Mike McGinn’s plan to build a go-it-alone rail system, which would also have been funded by city-only taxes. That shouldn’t be too surprising—Roderick says McGinn, who has endorsed him, was one of his advisors on the plan.

After looking over the three-page, 10,000-foot-level proposal, I had so, so many questions. Among them: Was $1 billion just a nice, round number, or does Roderick think the city can actually build 100 miles of rail for $10 million a mile? Does he consider regionalism a bad thing? Is this proposal, which would require a significant increase in property taxes (Roderick and Bassock estimate around $200 per year for the average household), a whack at Mayor Ed Murray’s $930 million Move Seattle property tax proposal? And how does he expect to afford the kind of right-of-way that would be necessary to give each streetcar “its own lane, priority at traffic signals, and … complete separat[ion] from traffic”?

First of all, to answer the question I’ve heard come up most often: No, Roderick’s rail plan wouldn’t replace Move Seattle, and Roderick says he is not opposed to the mayor’s levy. Instead, Roderick says, his plan would help shore up a proposal full of “piecemeal fixes” that he says fails to “address this aspect of what is going to be a comprehensive redesign of a lot of our public spaces and roads. … To build all that stuff [in Move Seattle] and to not have a rail component, and then to come back later and redo it all, is going to be not just incredibly expensive but crazy.”

And speaking of incredibly expensive: Where did that nice, round $10 million-per-mile dollar figure come from? It’s an estimate that seems especially implausible in the context of the streetcars we’ve already built or are in the process of building, on First Hill and in South Lake Union. Those lines cost between $30 million and $40 million per mile, on relatively flat land; given those demonstrably higher costs on the ground, it’s tough to see how Roderick could slash per-mile prices up to 75 percent.

To Roderick, though, his proposed streetcar lines (none of which are mapped out in the plan, making it hard to judge them on their merits–although some neighborhoods like steep Queen Anne and congested Fremont bring special challenges for streetcars) bear few similarities to the ones in South Lake Union and First Hill.

“I think the mistake that we make is looking at the cost per mile of the South Lake Union streetcar, or First Hill, and figuring that’s what it costs per mile to build streetcars in Seattle,” Roderick says. “The reality is that when they were building the South Lake Union streetcar, they were also rebuilding all the sidewalks and drainage. It was a comprehensive rebuild of the whole neighborhood, and a lot of that got attached to the cost of building the streetcar cost per mile. In fact, that isn’t reflective of what it costs to lay down rail, and you don’t have to rebuild the sidewalks all the way through.”

“We’ve learned a lot from building those two trains, and a lot about what not to do—in particular, that intermingling those trains with traffic doesn’t make sense.”

But separating the trains from traffic in dedicated lanes, like the portion of light rail along Martin Luther King in Southeast Seattle, also adds costs, and will be political kryptonite to the large and vocal subset of voters who believe transit-versus-cars is a zero-sum proposition. Although Roderick is characteristically blithe about the inevitable protests—”Traffic on 45th is not going to get better by not building a train”—those protesters are going to matter if his streetcar plan goes to a vote.

And their voices will be harder than usual to ignore. Unlike Move Seattle, which is pay-as-you-go, Roderick’s proposal would use up some of the city’s existing bonding capacity, which requires a 60-percent majority at the polls. (Move Seattle would fall under a different property tax cap.)

Bonding measures are like credit cards—instead of spending as it goes, the city borrows money and then pays it back, with interest, from a revenue stream such as a property tax. (In this case, the property tax level would probably be very roughly equivalent to Move Seattle, which would cost homeowners $61 per $100,000 of assessed value). When we vote for bonds, we’re agreeing to take on risk and use up some credit we could be spending elsewhere, which is why the city charter mandates a higher threshold to take on such debt.

Even if the Roderick rail plan clears that electoral hurdle, there’s the equally sticky question of the so-called head tax, a tax on each worker a company employs. Most council members hate the head tax (which the council itself overturned in 2009) and those who don’t hate the head tax have plenty of ideas for what they’d like to do with it. (See: Kshama Sawant, Nick Licata.) Roderick says that’s just because we don’t have the right council members yet.

“The employee hours tax is controversial, not with voters who voted for it, but with the sitting city council that repealed it, even though the voters favored it, because they were lobbied by their powerful friends. (Three of those nine council members are no longer on the council.)  “We need to recognize that we have powerful companies that are major employers all choosing to move into downtown Seattle. … I think those businesses also recognize that there will be an expectation that they help offset the disruption. … If you’re going to spend $1 billion on a new campus for your company, some percentage of that can go to helping us move people around the city. That’s not outrageous. We shouldn’t regard it as an onerous burden.”

Speaking of his overall vision for Seattle’s transportation system, Roderick says, “We are building a system for 20 to 50 years from now, at which point the single-occupancy, gasoline-powered car is going to be a thing of our distant memory. Yes, it is difficult to paint a picture of how different it’s going to be in five or 10 years, but that difficulty is a small challenge compared to the difficulty of failing to build with the future in mind. I’m excited about the prospect of going to the people of Seattle and saying, your single-passenger car with a gasoline motor is a thing of the past. That may be difficult to imagine, but you’re going to be so glad when it’s gone.”

Roderick is clearly passionate about transportation, and there’s no doubt it’s something he’s thought about, at least from a flyover perspective, plenty. If he’s elected, though (and I believe he may be), he’ll have to come down from his cable car and confront the practical and political realities on the ground.