Looking at more detailed city data across the region, the news is more complex and yet more encouraging. Not only is Seattle leading King County, but much of the growth elsewhere in the County is coming from the central Eastside. In 2014, Seattle grew 2.3%. Among the cities of the central Eastside, Bellevue grew 1.8% in 2014, Redmond 3.0%, Kirkland 1.5%. Renton grew 1.3%, and all of the rest of King County averaged just 1.1%.

This mostly looks like concentric circles of slower growth the further one gets away from downtown Seattle. 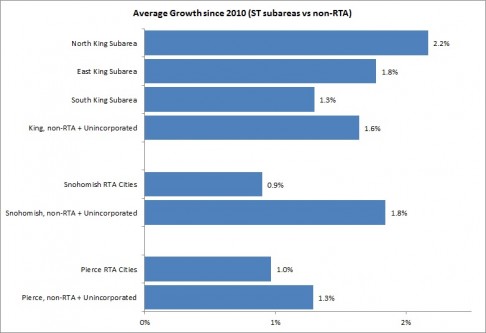 King County has some outposts of higher growth at the edge of the Urban Growth Area (UGA), where large developments are transforming some small cities. Over the last four years, Snoqualmie has averaged 4.1% growth per year. North Bend and Duvall exceeded 3%, and even Issaquah has averaged 2.8% growth as the Highlands are built out. But these four cities accounted for less than 5% of all growth in King County.

Overall, most population growth in King County seems associated with redevelopment, with the fastest infill growth rates in Seattle and the Eastside around Bellevue. The further one moves from Seattle and Bellevue, the less redevelopment one sees. On the edge of urban King County, this is offset by high percentage growth rates associated with greenfield development (where the denominator is correspondingly small).

Contra King County, both Snohomish and Pierce are still seeing most of their growth in the outlying areas. The primary city in each county lags the other cities which in turn lag the unincorporated areas and smaller cities outside the core. Sprawl, in other words. Everett’s average growth rate is a modest 0.8%, vs. 0.9% for the other cities in the Snohomish subarea, and 1.8% for the outlying cities and unincorporated areas. 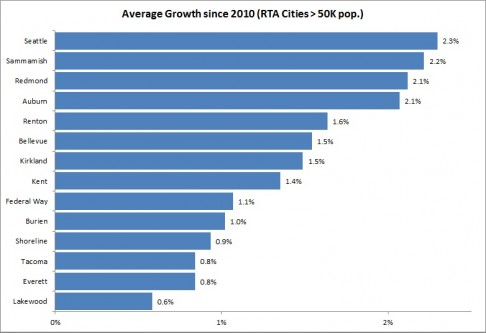 The data sheds some light on the oft-criticized Everett growth projections. After adding 44,000 residents in just four years, the projection of 200,000 more County residents in the next twenty looks very plausible. Snohomish’ challenge is to more than quadruple Everett’s share of that growth. The fastest growing cities in Snohomish are Bothell and Mill Creek, boosted by commuters to Seattle and the Eastside. Unincorporated areas close to King County may be growing even more quickly. If King County’s jobs growth is driving Snohomish residential growth, then directing commuter-led growth to a city ten miles further from King County workplaces won’t be easy.

We’re correspondingly reminded how the Eastside’s traffic congestion is related to high housing costs. I-405 is seeing the impacts of  “drive till you qualify” as economic growth bumps up against the King County’s regulatory limits on residential development, and pushes residential growth further along the I-405/SR 167 corridor.

South King lies somewhere in the middle. Auburn is outpacing other cities. Otherwise, growth is mostly slow, but evenly distributed, with most cities generally averaging about 1% per year, and no well-defined focus for growth.

How fast might cities in the region grow if recent trends are sustained? If the growth rates of the last four years were sustained over the next 25, Seattle would grow 76%, Bellevue 47%, Tacoma 23%, and Everett 23%. Other large cities in King County would also grow strongly (Renton +50%, Kirkland +45%, and Kent +40%). The pace of growth in Seattle, and some others, will surely bump up against development capacity. Neither Seattle nor many Eastside cities have planned for such growth rates to be sustained, so zoning limitations will constrain many cities if growth doesn’t slow organically. But current trends should prompt a rethink of regional projections.

113 Replies to “Growth is centralizing in Seattle and the Eastside”