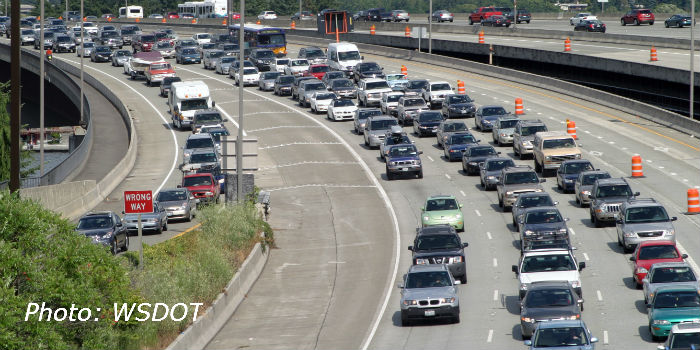 A flurry of transportation-related bills passed the state legislature last week, with most of these bills signed by the governor on Monday.

Engrossed Substitute House Bill 1219 lists 130 specific state-owned bridges the legislature deems to be structurally deficient, creates exemptions from the State Environmental Protection Act for reconstruction on these bridges, disallows bridge reconstruction under these exemptions to be used to add lanes, and allows emergency contracting procedures. The governor has signed this bill.

ESHB 1842 creates a transit grant coordination program within WSDOT for King, Pierce, and Snohomish Counties, with a requirement for two or more agencies to apply jointly for a grant. Signed by the governor.

SHB 2012 gives WSDOT some flexibility to deviate from the standard design manual in pursuit of practical project design. Signed.

2ndESSB 5987 contains the authority for the ST3 vote and the $16.1 billion long-term highway capital expenditure plan. STB reported and editorialized on the bill last week. Signed on July 15.

2ESB 5993 raises the trigger amount for requiring that 15% of a WSDOT project’s labor hours must be performed by apprentices from $2 million to $3 million, and requires the Department of Labor and Industries to provide contractors with an electronic option for filling out the prevailing wage survey. Signed on July 14.

2ESSB 5994 requires local governments to give WSDOT an answer within 90 days of a permit application, if at all possible, and creates new exemptions for WSDOT from the Shoreline Management Act. Signed.

2ESSB 5996 attempts to streamline permitting of WSDOT projects, while including the recognized tribes, and requires design flaws costing more than $500,000 to be reported to the legislature’s transportation committees within 30 days. The governor vetoed section 9 of the bill, which called for a number of studies now redundant with studies in other signed bills, and signed the underlying bill.

The rest of the transportation-related bills passed earlier this year are below the fold.

2E2SHB 1276 prescribes procedures for the installation of Ignition Interlock Devices for repeat offenders with a history of DUI offenses, requires the IIDs to have GPS, updates procedures for mandatory blood tests, and outlaws having marijuana in the open area of a vehicle on a highway. The governor vetoed section 25 of the bill, with the result of eliminating some new regulations on blood testing and phlebotomist certification that the governor found to be unnecessary and expensive, and signed the underlying bill.

HB 1282 adds driving while in noncompliance with a child support order to the list of third-degree misdemeanors covered by the driving-with-a-suspended-license law. Signed.

ESHB 1299 is the 2015-2017 transportation appropriations bill, and adds appropriations for the 2013-2015 biennium. The governor vetoed several portions of the bill, and signed the underlying bill.

SHB 1851 grants locally-owned bridges that are deemed to be structurally deficient the same exemptions from the State Environmental Protection Act that WSDOT bridges have. Signed.

HB 1884 adds one-wheeled self-balancing devices powered by 2000 watts or less and limited to 20 miles per hour to the definition of Electric Personal Assistive Mobility Devices. EPAMDs are not allowed on fully-controlled limited-access highways, but are allowed are sidewalks, subject to some local restrictions. Signed.

HB 2181 calls for WSDOT to determine various places on I-90 and other highways where the speed limit could be increased to 75 miles per hour, and gives the Secretary of Transportation the power to increase the speed limit to 75 miles per hour on any highway. The governor vetoed section 1 of the bill, reducing the bill to merely empowering the Secretary, and signed the underlying bill.

SB 5085 adds siblings of members of the armed services who died while in service or as a result of that service to the list of eligible recipients of Gold Star license plates, and exempts widows or widowers of such servicemen and women from all annual license fees on one vehicle. Signed.

SB 5100 removes the decades-old exception for rented or leased vehicles from Department of Licensing reporting requirements, and transfers liability for unpaid infractions to the renter. Signed.

SB 5207 allows tow-truck operators to have a lunch break in their business hours, but requires a staffer to be available within 30 minutes to release impounded cars, and to cease charging for storage effective at the time someone outside the business office makes a call to request a staffer to release the car. Signed.

SB 5297 updates language for commercial vehicle registration and fuel taxes to conform with the International Registry Plan (which apportions revenue among US states and Canadian provinces) and various federal statutes, and reinstates the Aeronautics Account, which was inadvertently deleted by SHB 1883 in 2013. Signed.

SB 5307 increases the state’s reimbursement to Pierce, Whatcom, and Skagit County for county ferry operations from $1 million to $1.8 million per year, and then indexes it to inflation starting in 2017. Signed.

SSB 5362 requires a responsible alcohol permit holder, other than the driver, on or near commercial buses that serve alcohol, and bans smoking on these “party” buses. Signed.

SSB 5438 allows bicycles and mopeds to stop and proceed through traffic control signals under the same restrictions and requirements as motorcycles. Signed.

SSB 5481 requires WSDOT to implement new toll collection procedures by June 30, 2016, including email and phone notification, if available, 10 days before issuing a notice of civil penalty; gives WSDOT leeway to dismiss penalties for various circumstances, including first-time non-payment; and requires WSDOT to issue a letter of apology when it is at fault. Signed.

ESB 5863 requires WSDOT to coordinate with the Department of Labor and Industries, rather than the Apprenticeship and Training Council, to expend funding for apprenticeship training and support. Non-federal money is to be used for the program, to the extent possible. A new WSDOT position is created for outreach to communities underrepresented in the construction workforce. Signed.

A full list of bills that passed the state legislature this year is available here. You can see whether the governor signed, vetoed, or partially vetoed bills here.

10 Replies to “Tranportation Bills Passed in State Legislature This Year”