Last year Metro won a $4.7 million federal TIGGER grant to purchase two Proterra battery-operated buses and two charging stations. Last week Metro finished installing and began testing a fast charger at Eastgate Transit Center. Currently a Proterra factory unit is being used (not the one that visited earlier this year) but later three different vehicles will be delivered. Metro originally intended to purchase two charging stations but decided against a second station and instead applied that funding toward the purchase of a third bus. The first vehicle is expected to be delivered this fall with the other two coming later in the fall. 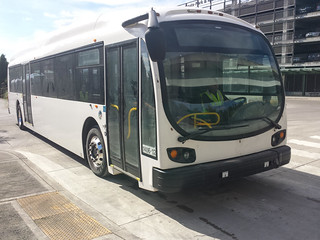 The vehicles won’t go in to revenue service for quite some time; initial testing will last a few weeks after arrival and more in-depth testing will occur for up to a year for Metro to determine how they perform in Metro’s service area. This data will be used to decide how they might fit in with their future fleet plans. While no final decisions have been as to what routes will see some electric action, routes 226 and 241 are the most likely candidates. They are interlined on an 18.25 mile route and terminate at Eastgate TC. If the buses are able to go the distance, 221 and 248 are other possibilities since they both have layovers (in one direction) at Eastgate TC. During the testing period, the vehicles will likely be placed on a variety of routes to gather as much performance data as possible. While the exact numbers will depend on the batteries’ state of charge, Metro’s contract stipulates that the vehicle will need to be able to charge in 10 minutes or less and be able to maintain a 23 mile service route off that charge, and Proterra has been able to meet that requirement.

This project is more of a R&D project for Metro than a rush to put new technology in to revenue service. Metro is using it to determine whether or not battery technology could be used on replacement 40′ buses. A PowerPoint presentation from Metro’s vehicle maintenance outlines the goals and some of the construction of the vehicle. An interesting note is that BYD and New Flyer also bid on the contract (Design Line, E-Bus, Nova, and Skoda dropped out).

A few photos of the testing can be found here.