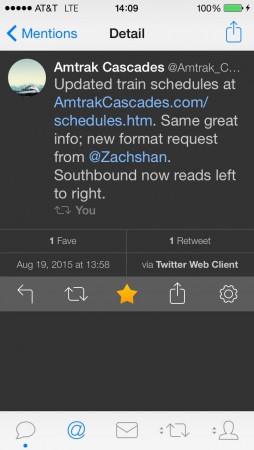 Just four days after a slow-news-day Saturday rant about Amtrak Cascades’ illegible timetables, the timetables have been fixed. Amtrak Cascades’ Twitter account sent out the update Wednesday afternoon. They’re still not perfect, as the inclusion of the Empire Builder is useless for trips along the Cascade corridor, and the tables are still very difficult to read on mobile. But the main problem, the backwards timetables reading right-to-left in the Southbound direction, is now fixed.

Score another one for transit blogging creating more urgency than months of public requests getting lost in the bureaucratic ether. Thanks to WSDOT to their attention to this small but important matter.

8 Replies to “Amtrak Cascades Timetables Have Been Fixed”