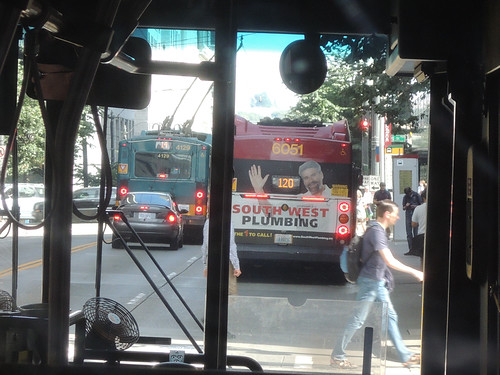 Seattle’s transit infrastructure is years behind what it should be to accommodate current ridership, let alone the thousand or more human beings sinking roots in our city every month. The Move Seattle levy, assuming voters approve it in November, will be a good step forward – but we’ll still be playing catch-up.

What if Seattle had another $20 or $30 million per year to accelerate the build-out of transit corridors and other BRT-related capital projects in the Transit Master Plan, and maybe add more service to boot?

Seattle can make it happen. With a little political will on the part of our City Council, Seattle can generate significant revenue from a progressive and comparatively stable source: a new-and-improved Employee Hours Tax (EHT). Let’s glance over the recent history of this tax before considering how to refashion it for today.

History of the Employee Hours Tax

The Seattle City Council first approved an EHT in 2006, along with a Commercial Parking Tax. Both complemented the Bridging the Gap levy, and were also slated for transportation maintenance and improvements. The EHT required businesses to pay a modest $25 per full-time employee per year, exempting small business and employees who didn’t drive alone to work. Over the 9-year lifespan of the $365 million property tax levy this would have brought in an extra $50 million or so.

In 2009, one year into the Great Recession, the city council repealed the Employee Hours Tax. Although $25 per employee wasn’t enough to actually discourage hiring (Councilmember Tim Burgess call the repeal “somewhat symbolic”), business groups complained the tax was hurting the reputation of Seattle’s business climate. Led by Burgess, then-Councilmember Richard Conlin and then-Mayor Greg Nickels, and despite resistance from sustainability advocates and groups such as Cascade Bicycle Club that saw no reason to forego millions in bike and pedestrian improvements for a symbolic gesture, the city council conceded.

Fast forward to spring 2014, when King County’s Proposition 1 went down in flames. As Seattle prepared to take action to save bus service, Councilmembers Nick Licata and Kshama Sawant teamed up to revive the EHT. Rather than simply rerunning the county’s ballot measure in Seattle, they proposed replacing the regressive sales tax hike with a 5% Commercial Parking Tax increase and an EHT set at a very modest $18 per worker per year, or less than a penny per hour. Interestingly, this EHT was projected to raise $7 million per year, significantly more than the repealed version, which in 2008 generated only $4.5 million. While the Licata-Sawant proposal also exempted small business (up to the current B&O threshold of $100,000), it dropped the exemption for employees who do not drive alone to work. This change wound not only increase revenue but also make the tax significantly easier to administer. In the end, to no one’s surprise, the council rejected the Licata-Sawant proposal 2-6 and Seattle’s Prop 1 went to the ballot in its original form.

The following year – that’s this past spring, 2015 – when all eyes turned towards the Mayor’s proposed Move Seattle levy, the stage was set for another try. Councilmember Licata raised concerns about how voters would respond to the $930m price tag, coming amidst a volley of property tax measures: parks and preschool, transportation, and later the Seattle Housing Levy, which the HALA committee recommended double in size on the 2016 ballot. And so Licata and Sawant proposed a diversified funding approach, bumping the median property tax bill down from $275 to $175 and making up the loss through $100 million in development impact fees and the same combination of a Commercial Parking Tax increase and an EHT.

This second revival effort also failed 2-7, but significantly, most of the council expressed support for an Employee Hours Tax in principle. Mike O’Brien and Tom Rasmussen  stated that it’s not a question of if we use the EHT, only when and what for. Bruce Harrell has expressed support. In a meeting with the Transit Riders Union, Burgess said he could support the tax if it is tied to congestion by requiring employers that bring commuters into high-traffic areas to pay more. The general refrain during council discussions was that the EHT shouldn’t be used to displace other funding mechanisms, because Seattle’s unmet transit needs are so deep we’re eventually going to need all the options.

I believe it’s time to start using this one now. Every year we wait to pass a robust Employee Hours Tax, we lose millions of dollars in progressive revenue that could be building the world-class transit system Seattle so desperately needs. So let’s pass an EHT and, while we’re at it, let’s make it good. Here are some initial thoughts on what that means.

So, how and when is this going to happen? I would love to see a robust Employee Hours Tax passed before the end of this year. Given that most if not all of the current council has expressed support for this funding option, I think we should push them to act.

If this year proves too short a timeframe, at the very least we can get a Statement of Legislative Intent in the budget so that consideration is assured for next year. The city is already in the process of studying transportation impact fees, and much of this analysis could be made relevant to an EHT. The impact fee study is funded through the end of this year, and the Mayor is expected to propose additional funding to extend it into 2016; the city council could condition these funds to ensure that the analysis also covers a congestion-zone approach to an EHT. A well-designed EHT could end up being a tool far superior to impact fees, which must be tied to current development and are far more restricted in use. If needed it could even be re-branded (how about an “Urban Impact Fee”?) to shift the emphasis away from employment and towards the impact of growth.

One way or another, the EHT is a progressive revenue source Seattle can’t afford not to use. So let’s bring it back, and let’s make it good this time.

69 Replies to “Let’s Bring Back the Employee Hours Tax, and Make it Good This Time”