Over the weekend Mike Lindblom had an in depth piece discussing East Link’s need for an additional $20m for engineering the I-90 bridge section of East Link, the world’s first floating bridge featuring rail transit. The contract with Parsons Brinckerhoff will be expanded – from $36M to $56M – to solve the final 8 (of 23) technical issues that WSDOT raised in a 2008 letter. The $20M will be paid out of $97M in unspent surplus engineering funds at Sound Transit’s disposal.

While there was some disappointment on the Board at the additional cost, and some admittal of inefficient workflows and delayed problem solving of some East Link’s unique challenges, there is no scandal here. ST is spending 21% of a reserve fund, for a total that amounts to 0.7% of the project budget, to take a conservative approach and ensure due diligence on the safety of the design. It’s an entirely sensible course to take, and indeed the scandal would be if they failed to spend the necessary funds to ensure the safety of the project. 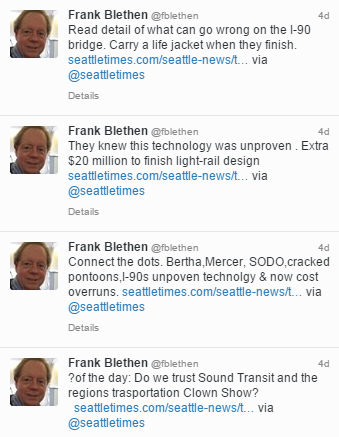 But while Lindblom’s reliably even-handed and fact filled article only once descended into sensationalism – painting a scene of a derailed train joining the fossil forest at the bottom of Lake Washington – Seattle Times Publisher Frank Blethen responded to the news of the $20M addition by stoking inaccurate fears about the East Link project. In a series of tweets last Saturday, Blethen’s accused Sound Transit of incompetence and implored future East Link riders to ‘carry a life jacket’.

Back in 2009, in order to reduce risk to the bridge deck and extend its useful life, an Independent Review Team asked Sound Transit to minimize any drilling or penetration of the bridge deck when securing the concrete blocks used in lieu of rail ties, and WSDOT later went on to ask them to eliminate drilling entirely if possible. So Sound Transit went back and successfully tested securing lighter weight concrete blocks (125lb per cu. ft. instead of the standard 150lb) with epoxy, and by all accounts those tests went swimmingly well. Prior to reinforcement, the concrete only cracked at 200% of its max design load, yet ST still decided to add circumreferential rebar to strengthen it further (obtaining about 400% above the design load). The threshold for failure is now so high that the rails and the clips that attach them would twist off well before the concrete itself would fail, which wouldn’t occur even if you ran freight trains on East Link in a severe windstorm. This is massive redundancy.

In addition, fears about uncaptured electrical current – causing corrosion in the obviously wet environment of a lake bridge – have likewise been solved. ST has tested and proven a wet system that meets WSDOT requirements on the floating structure, which is 5-10x the normal resistance required in other systems when they are dry.

So while the engineering is impressive and difficult, it’s well within our capabilities. In any case, while it is theoretically possible that some yet unseen engineering hurdle could scuttle the project, the likelihood of Sound Transit attempting to operate an unsafe system is effectively zero. Sound Transit’s Bruce Gray told me afterward that, “It is not a question of if we can do it, it’s a matter of how soon can we get started.”  You can leave the lifejacket at home.

53 Replies to “Don’t Listen to the Times: East Link Will Be Safe”