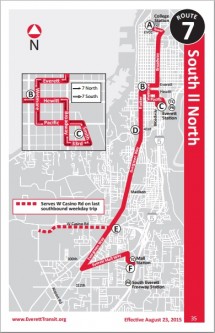 Everett Transit, the aunt-who-moved-to-Florida-before-you-were-born member of the Seattle Transit family has it’s fall service change tomorrow, August 23rd. I’ve only used ET about a dozen times so cannot comment much on the particulars, but I would like to praise the underlying philosophy of the changes. Unproductive tails, trips and routes are being cut with the hours reinvested in core service. In fact Everett Transit will now have its first all day (well 8 am to 6 pm) 15 minute frequency route after this shakeup (Route 7). Bravo!

Holiday service is restored on Thanksgiving, Christmas and New Year’s Day, reduced on Day after Thanksgiving.

Here is a link to the new schedule book.