Late yesterday afternoon, Metro transmitted to the King County Council a proposed ordinance including a final U-Link restructure proposal, along with a few other changes also scheduled for March 2016.  Executive Constantine issued a press release summarizing the proposed changes.  UPDATE:  Councilmember Larry Phillips has introduced the changes as two separate ordinances.  2015-0350 covers the changes related to U-Link, while 2015-0349 covers the RapidRide C/D split and other miscellaneous changes.

There are some important differences between the final proposal and Metro’s last proposal, which we covered in March.  But the basic idea is the same.  In Northeast Seattle, Metro is proposing a major restructuring that would double frequency on almost all of the area’s all-day routes, and add some new coverage, in exchange for requiring some off-peak riders to transfer to Link or another bus to go downtown.  In Capitol Hill, Metro is proposing a less extensive set of changes mainly intended to improve frequency and reliability on busy routes and connect more areas to Capitol Hill Station.  As with the March proposal, there are almost no changes to SR 520 service, although Metro’s Victor Obeso said yesterday that proposals for SR 520 are likely to be reintroduced later in an Eastside-specific process.

I and the STB staff I’ve talked to are extremely happy about the Northeast Seattle proposals in particular, because they would profoundly improve all-direction mobility in a part of the city where the bus network is decades old and built around infrequent rides to just two destinations.  I see this ordinance as the best opportunity the Council has had in years to improve the usability of Seattle’s transit network, and urge the Council as strongly as I can to pass it.

Details of the proposals below the jump.

Super-Frequent Link Connections in the U-District.  Metro faces a geographical challenge in replacing downtown express service on routes 71, 72, and 73 until U-District Station opens in 2021.  The current express service has heavy demand from the U-District, while UW Station is a mile or so away, next to Husky Stadium.  Metro is addressing this issue by providing extremely frequent bus service between UW Station and the U-District on five separate all-day routes: 44, 45, 48, 67, and 271.  In addition to these all-day routes, several peak-hour routes also serve the trip.  Metro is promising frequency of 3-4 minutes at most times of day, and no less than 8 minutes at any time when buses are running.

New Transfer and Wayfinding Options at UW Station.  Metro, SDOT, and UW are cooperating to move most bus stops near UW Station closer to the station.  Bus stops along Pacific Street will be moved as close to Montlake Boulevard as possible.  New stops will be established on Montlake Boulevard near Pacific Place.  For routes running through the UW campus, a new pair of bus stops will be added along Stevens Way at Rainier Vista, about a 5-minute walk from UW Station.  Metro and Sound Transit are still working out details of the wayfinding plan, but Metro promised us that clear signage will help passengers transferring from Link locate bus routes serving any of these stops. 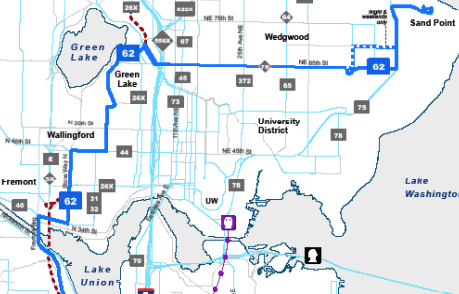 Create New, Frequent One-Seat Service Replacing Route 71.  Metro would replace route 71 along NE 65th St with a new route, Route 62, running every 15 minutes, seven days a week (and more frequently during peak hours).  The route would run between Sand Point and downtown via Ravenna, Green Lake, Wallingford, Fremont, and South Lake Union.  It would preserve a one-seat ride to downtown for current route 71 riders in Ravenna and Roosevelt, and bring new frequent transfers to Wallingford, Fremont, and South Lake Union for riders throughout Northeast Seattle.  For riders in Wallingford, it would replace route 16, adding a new connection to Fremont at the cost of a few minutes’ extra travel time. 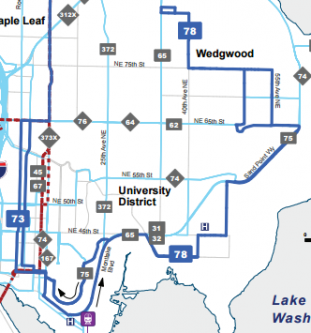 Provide New Connections for Wedgwood and Laurelhurst.  In response to criticism that Metro’s previous plans did not adequately replace the Wedgwood “tail” of route 71 or the Laurelhurst portion of Route 25, Metro added a new weekday, half-hourly route connecting Wedgwood, Laurelhurst, UW Station, and the U-District.  This route would provide connections to both Link and the U-District with similar frequency to today’s route 71 and double the frequency of today’s route 25. It would be through-routed with revised route 73, which provides weekday coverage service to lower Roosevelt Way, eastern Maple Leaf, and Pinehurst.

More Frequent Peak-Hour Express Buses.  Metro is adding service to several peak-hour routes that travel from Northeast Seattle directly to downtown, South Lake Union, and First Hill.  It’s also creating a frequent transfer point between peak-hour express routes at Green Lake P&R, to allow new connections.  Route 76 would nearly double the number of trips, partly by expanding the span of service to include a few “shoulder peak” trips, and route 316 would add a few trips as well.  A new route 63 and a revised route 64 together would offer connections from Northgate, Maple Leaf, Lake City, Wedgwood, and Green Lake to South Lake Union and First Hill, with frequent transfers at either Green Lake or Stewart Street to downtown service.  Route 74 serving Sand Point and Bryant would see several additional trips.

Split Routes 8 and 48, and Increase Frequency.  These two long routes are among Metro’s least reliable; during afternoon rush hour, route 8 is the least reliable.  Both are also key connecting service to Link, each at multiple stations.  Metro is devoting substantial resources in this proposal to splitting each one in half to improve reliability and Link transfers.

Route 8 would be split at Mount Baker Station.  The north half, retaining the 8 number, would see a minor routing change in Madison Valley and an increase in daytime frequency to 12 minutes, although with no increase in currently inadequate night and Sunday frequencies.  The south half would be unchanged except to adopt a new number, route 38, and lose the major delays it experiences southbound.

These changes should dramatically increase reliability on the new 38 and on both halves of the previous 48.  They will not, unfortunately, directly do anything to solve the Denny Way mess that makes a hash out of the 8’s schedule.

Connect Route 11 to Link, and Increase Frequency.  Route 11 would be revised to serve Capitol Hill Station by using John Street, rather than Pine Street, through Capitol Hill.  It would remain on Madison east of 19th, while Madison west of 19th will be served by unchanged route 12.  Frequency would increase to 15 minutes all day, six days a week, and 30 minutes nights and Sundays.  Metro did not implement its March proposal of an “all-Madison” route 11, choosing instead to insert a small deviation to serve Madison between Thomas and 19th.  Metro’s Ted Day estimated that the deviation will add 2-3 minutes per trip.

Replace Route 43 with Increased Frequency Elsewhere.  The funding for frequency increases on routes 11, 48, and 49 would come from discontinuing route 43.  Most route 43 riders would have straightforward replacement service on Link, or on more-frequent routes 8, 11, or 48.  Some riders, though, will need to transfer between route 48 and routes 8 or 11 at 23rd and Madison.  The increased frequency, with buses every 10 minutes on route 48 and 9 buses per hour on routes 8/11, should make these transfers a good deal less painful.

The ordinance includes a few changes in other areas, some related to the Link restructure effort, others not.

Revision of Routes 26 and 28.  Because new route 62 would take over for routes 26 and 28 along Dexter Ave in South Lake Union, both of these routes would become all-day expresses using Aurora, still at 30-minute frequency.  The revised 26X would use today’s 26X routing between Green Lake and downtown, bypassing Fremont and serving eastern Wallingford.  North of Green Lake, the all-day 26X would be extended to replace the northern portion of route 16, serving Licton Springs and North Seattle Community College.  The revised 28X would use a new routing through Fremont, using N 39 St (a walk of one long block from central Fremont) to reach Aurora, rather than N 46 St as with today’s 28X.

Routes 31 and 32 would also see a minor routing change to replace coverage to the Gas Works area now provided by route 26 local, approaching Fremont via Wallingford Ave and 35th instead of via 40th and Stone.

RapidRide C/D Split.  The RapidRide C and D lines would no longer be through-routed.  The C Line would be extended to South Lake Union via Westlake with a terminus near Fred Hutch at Fairview/Aloha, while the D Line would be extended to Pioneer Square along 3rd Ave.  Funded by Seattle Proposition 1, the split is expected to dramatically improve outbound reliability on both routes, and to help alleviate frequent overcrowding on current SLU bus service.

Grab Bag.  As always, there are a few minor items to cover: