The Sound Transit Board of Directors is scheduled to take action on the proposals for fare increases and adding a low-income fare category on ST Express and Sounder at its monthly meeting next Thursday, November 19, from 1:30-4:00 pm. The public comment period on the proposals ended last Thursday, so any further lobbying requires communicating directly with board members.

Most of the public debate has centered around implementing the low-income fare on all ST Express routes, and not just on routes that operate wholly within King County. The King-County-routes-only option would create a lot of confusion for holders of the ORCA LIFT (low-income) card.

The primary concern for having LIFT fares on all ST Express routes appears to be that Sound Transit staff projects the program will run at a small loss, but that’s because they’re assuming 100% of low-income riders will sign up. If we use more realistic assumptions, the fare change not only doesn’t lose money, it’s actually profitable. Let’s look at the numbers.

ST staff projects an annual profit of roughly $662,000 for a general fare increase with a new LIFT fare of $1.50 only on routes operated wholly within King County (522, 540-567, and 577). The option in which LIFT fares ($1.50 intra-county and $2.75 multi-county) are implemented on all ST Express routes is projected to be a net revenue loser, to the tune of $295,000 per year. Obviously, the all-routes option would bring in less revenue than the KC-only option, given that all the fares would be the same for everyone except LIFT holders, while LIFT holders would then be paying the LIFT fare instead of the higher regular fare. But the math required to get to that $957,000 annual hit — the difference between these two revenue projections — bears close inspection.

Sound Transit did an origin and destination survey in 2011 and 2012, from which it estimates 24.5% of ST Express riders would qualify as low income. But then, staff assumes that all those riders would obtain and use a LIFT card if LIFT were to be honored on ST Express, meaning LIFT taps would grow to 24.5% of all boardings.

The projected revenue loss for each LIFT tap, vs. the new regular ST Express fare, is roughly $0.75, when accounting for transfers and passes. LIFT taps are projected to be 4,653,539 out of 18,996,217 total ST Express annual boardings if LIFT is implemented on all ST Express routes.

King County Metro has several months of data on LIFT use. From May to September, LIFT as a percentage of ORCA boardings grew from 2% to 3%, with a slowing upward trend. Even if LIFT taps continue to grow at the rate they did from August to September, it would take years to get to 24% of boardings being by LIFT. 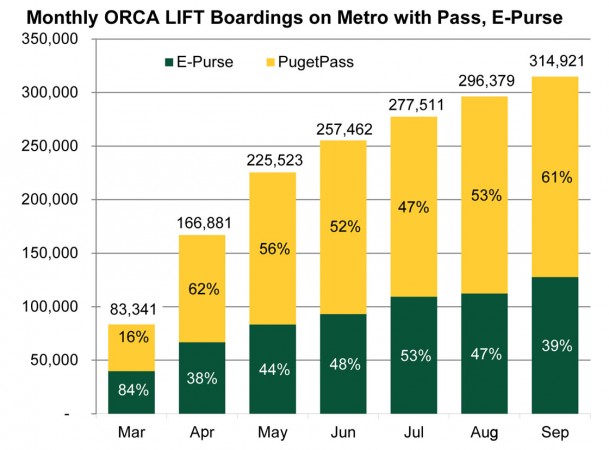 When looking at the graph above, consider that Metro has 120 million annual boardings, or 10 million per month.

If ST Express follows KC Metro’s trend, LIFT boardings would be closer to 4% the first year. Under that scenario, only 760,000 of all ST Express boardings would be by LIFT. After accounting for the extra revenue from regular-fare boardings by low-income riders, the annual profit off the all-routes version of the fare change would be $2.9 million.

Reality will lie somewhere between Metro’s experience and ST’s extremely-fiscally-conservative assumption that all riders who qualify as low-income will go get the LIFT card. The fare change, while honoring ORCA LIFT on all ST Express routes, is pretty much guaranteed to turn a substantial profit for the near term.

Meanwhile, the ridership projections for the LIFT-on-King-County-routes-only option has ridership going down from what would happen if there were no fare change, by 135,000 boardings per year. The projection for the LIFT-on-all-routes option would yield an increase of roughly 56,000 boardings per year. Once LIFT fares become available, any low-income rider considering quitting ST Express due to the fare increase would presumably make the rational choice of getting a LIFT card, and saving money.

A more realistic estimation of riders that would obtain and use ORCA LIFT would result in a projection of both ridership and fare revenue going up beyond what is projected for no fare change. That doesn’t include the operational savings from converting lots of cash fumbling to ORCA tapping (which saves 4.6 to 6.9 seconds per boarding, according to King County Metro data). More riders, more revenue, reduced travel time, and reduced barriers to being able to access public transit: Why would the Board not jump at this opportunity?

50 Replies to “Analysis: ORCA LIFT on all ST Express Routes a Win-Win”