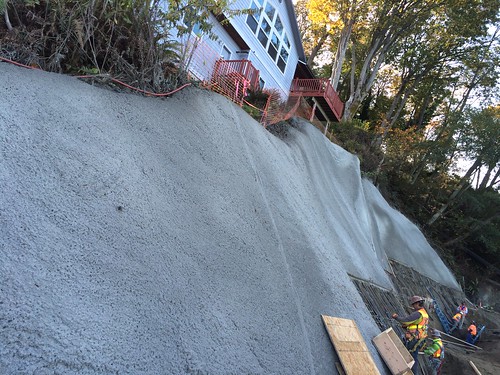 As rain pounded the Northwest last week, and thousands of newly transplanted Californians started to question their life choices, it seemed inevitable that a landslide along the BNSF corridor between Everett and Seattle would force cancellations of Sounder North and Amtrak Cascades trains. For those of us who remember recent winters, when the mudslides seemed to come every other day, triggering a 48-hour waiting period before passenger trains were allowed back on the tracks, it seemed like only a matter of time.

And yet, so far this year, the trains have kept running, due in no small part to a series of mitigation efforts WSDOT, BNSF, and local municipalities have undertaken in the last few years.   Since 2013, as part of the larger high-speed plan for the Amtrak Cascades corridor, and with the help of $800M in federal stimulus funds, WSDOT has been reinforcing a half dozen of the worst spots in the Seattle-Everett corridor.  The last of those two projects wrap up at the end of the month, according to Barbara LaBoe at WSDOT.

When I spoke to LaBoe, she was understandably reluctant to take a victory lap – “we’re working with Mother Nature and gravity,” she said, “there are no guarantees” – but she did add that WSDOT was “cautiously optimistic.”  In addition to the mitigation work on the slopes themselves, the catchment walls along the tracks could stop small mudslides, should any occur.

Additionally, LaBoe noted that the state appropriated more funds for landslide mitigation in the latest budget, and WSDOT is currently determining where to best use those resources.  Since “95% of mudslides happen in the Puget Sound area,” it’s a likely the funds will be used on the Cascade corridor, she said.

By the time the 20 HSR projects are done in 2017, we will see an additional two round trips between Seattle and Portland, with a full 10 minutes shaved off the schedule and enhanced reliability.

Sounder North, with its high subsidies and low ridership, is the red-headed stepchild of regional rail routes, but the aggregate subsidies are small in the grand scheme of things, and the marginal utility of taking just one additional car off of that stretch of I-5 during rush hour is actually pretty high.  If the mitigation efforts are successful, we might even consider amping up DMU-based Everett-Seattle Sounder service in the future. Heck, the BNSF tracks already serve Paine Field.

107 Replies to “Despite Heavy Rains, Passenger Trains Keep on Rolling”